This year Tera suggested doing a a skeleton train with a Western theme.  I, of course, have no idea how to build a train.  I am looking forward to giving it a good try, although it could be a colossal failure and waste of wood supplies. It should be a fun week that I took off work to throw this Halloween year together!

The idea is that hopefully we’ll have an engine on one side of the yard, and a cattle car on the other side that’s full of skeleton cowboys. This way our yard will still be full of Halloween creation, but there will be a pathway for the kids and parents to walk through to get to our front door. 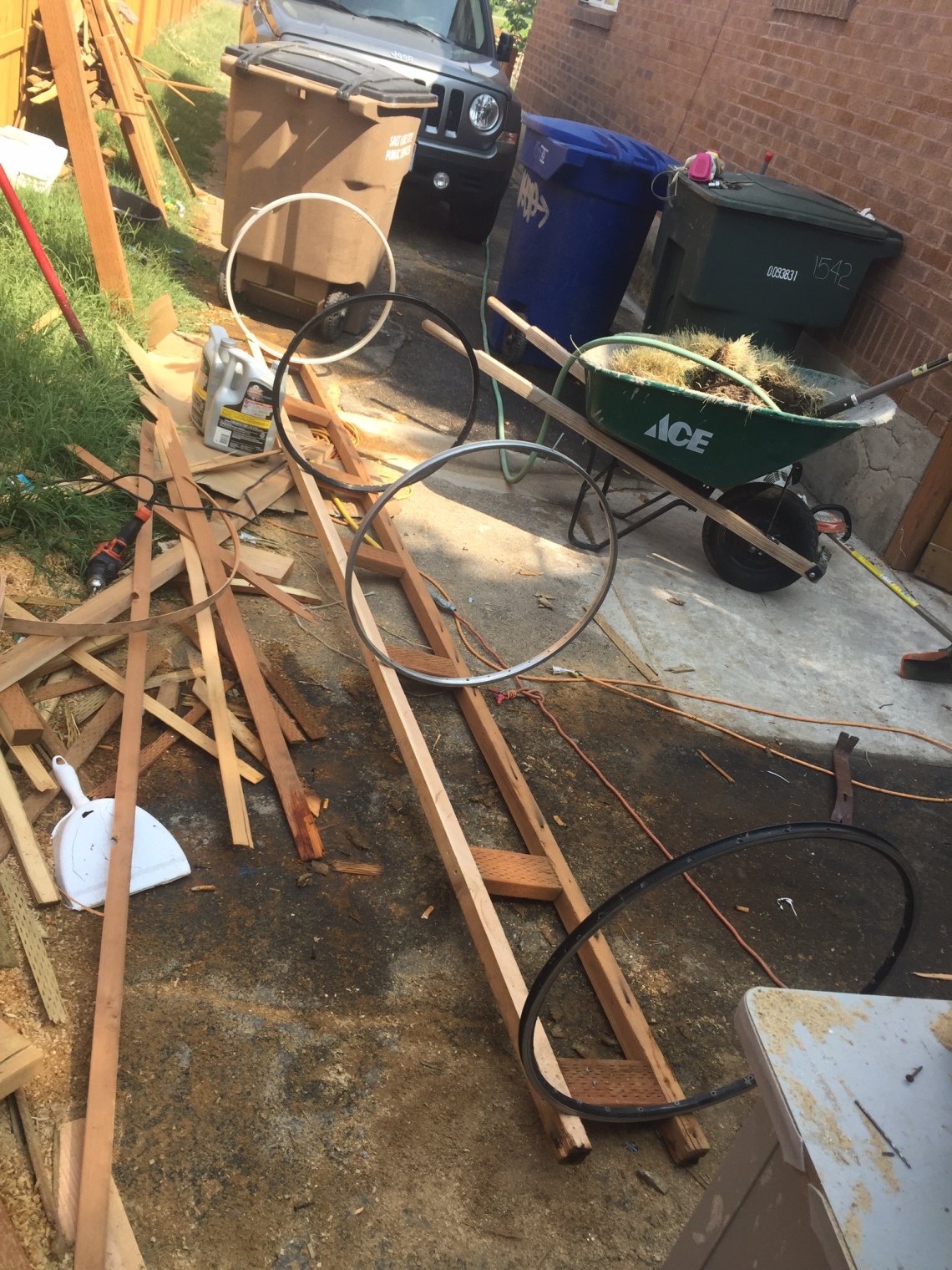 So, I’ve decided to start at the boiler tank. I asked my neighbors, the Barlows, across the street if they had any extra wheel rims (they are “The Bike Family,” who have a shop where they work on bikes next to their home). I got four rims from them, and have used the spoke holes as access to drill screws through to get to the wood. This is going to be the boiler tank cylinder, or at least I hope!

After looking at the diameter the rims would provide for quite a while, I decided that it wasn’t quite big enough for what I was trying to do. I took an old pressure treated 2X4 that I had lying around and cut them into approx 2 or 3-inch “nubs.” That gave it 7 more inches diameter, which I was much happier about visually. Again, I used the holes in the rims for the screws to attach the wood. I then ripped 2X4’s thin-wise at about 1/8″ and wet them down, then bent them to curve around and attached them to the “nubs” with finish nails through my nail gun. 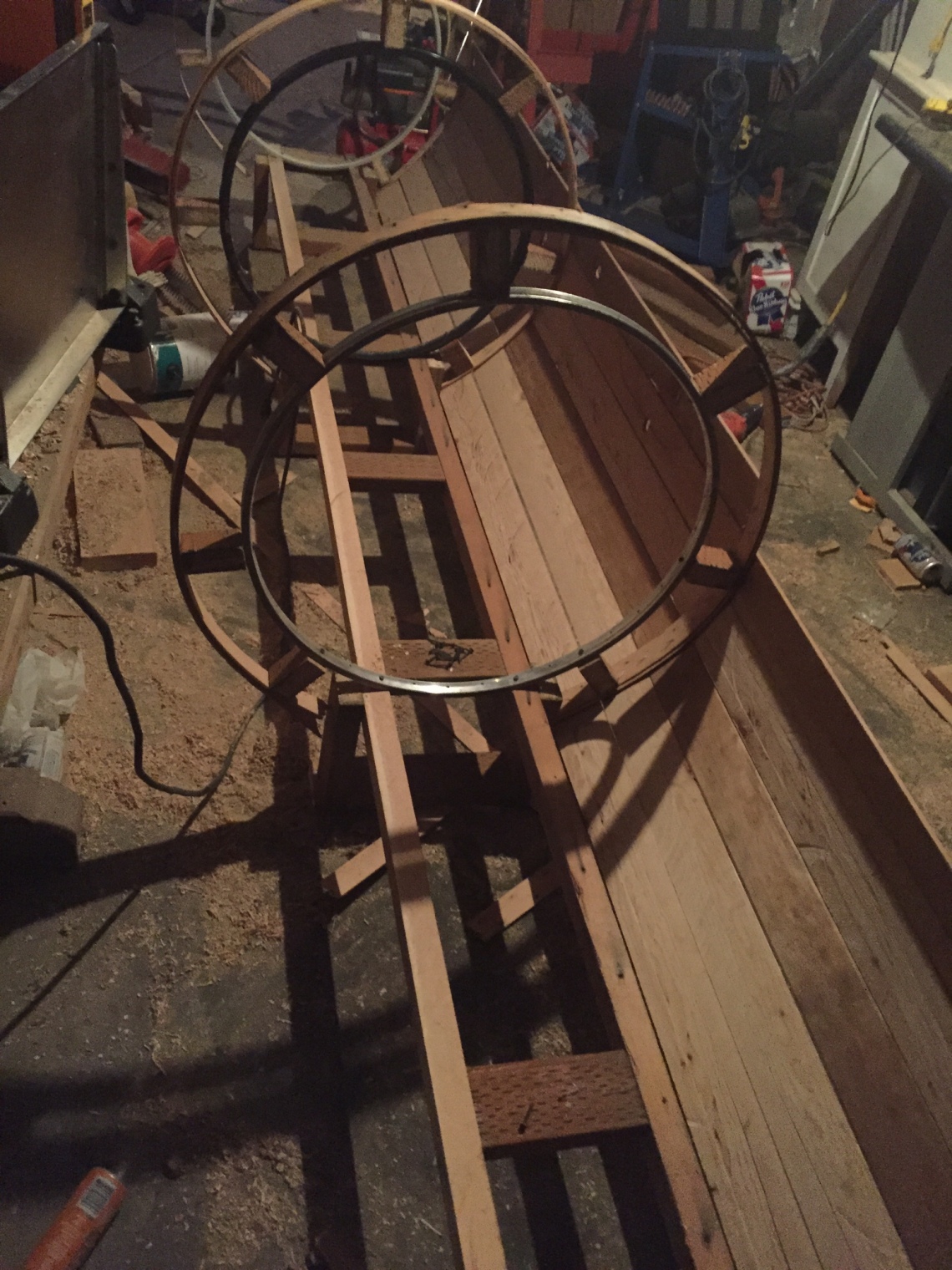 Here is the beginning of sheathing the boiler tank. Notice from the top piece of attached wood that this is about 1/8″ thick wood.  If you’re wondering where to buy that sort of wood, I don’t have any clue.  I used 2X4-ish lengths of wood from long pallets and scrap wood that would have otherwise been burned…

…as pictured here. This is obviously the best option for a long train, but if I didn’t have this available, I would have used shorter wood from shorter pallets and had my breaks more often (along the circular ribs). Be that as it may, all thanks to my truck driving brother-in-law Jason who was able to come across these industrial sized pallets. 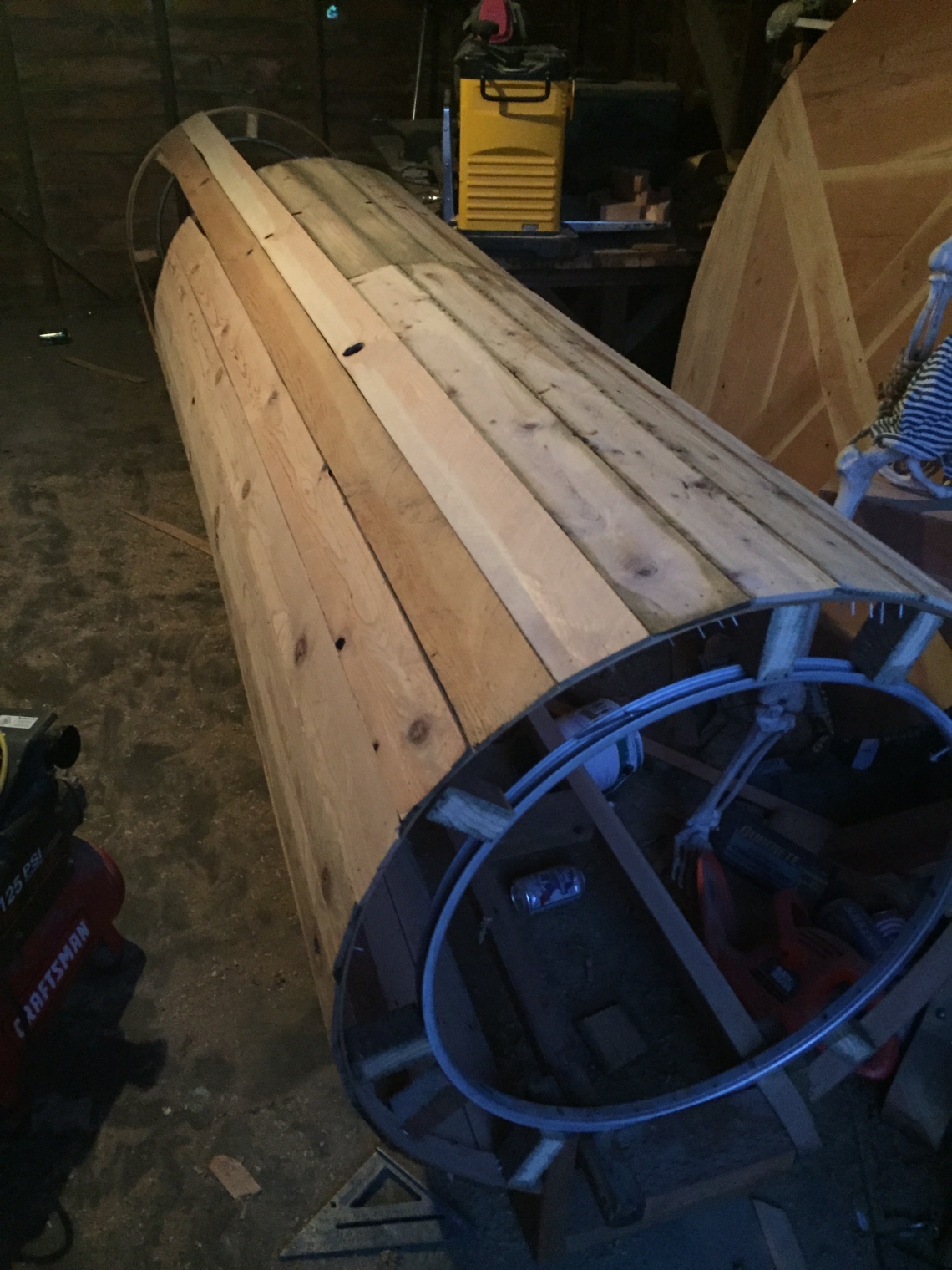 As I continue around the boiler tank, notice that the far back end from this view doesn’t quite reach all the way back.  I will just cut the planks to land halfway through the circular wood so I can attach the rest of that line. If I only had shorter pallets available, that would be more common. 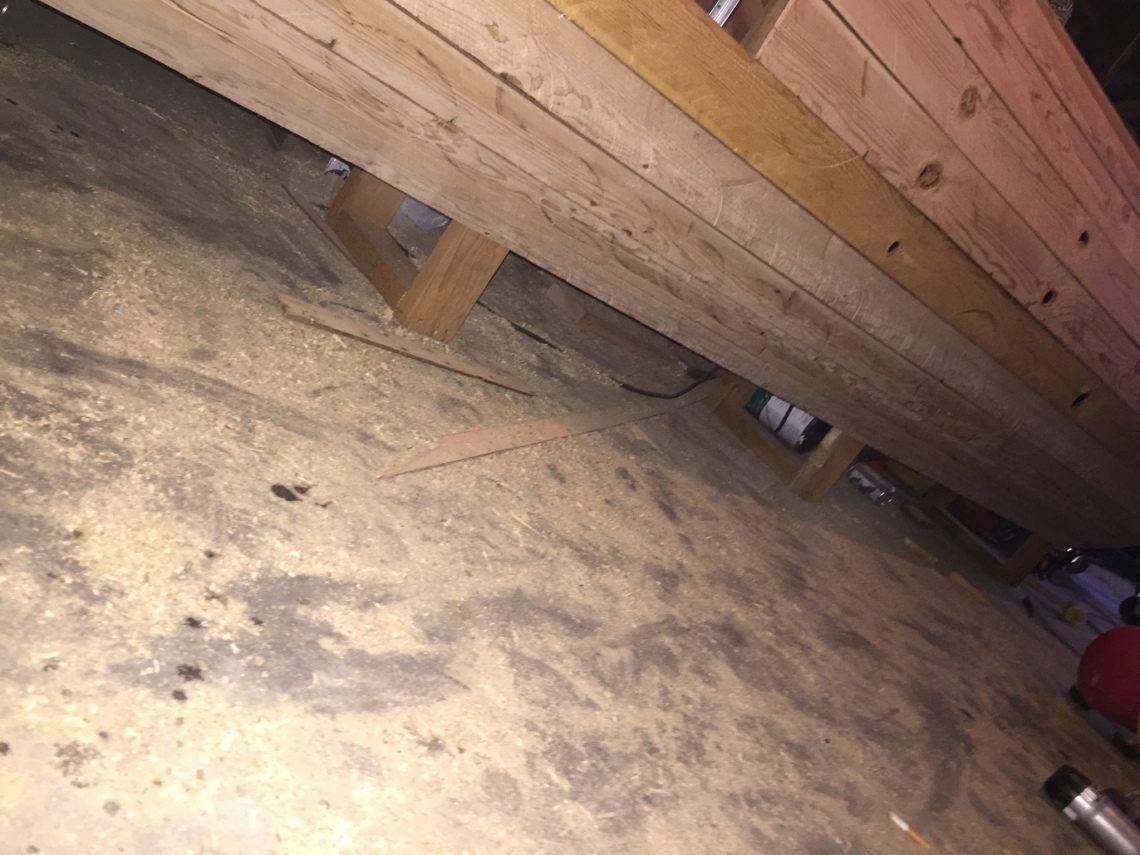 These footings will come in handy to attach it to other parts. 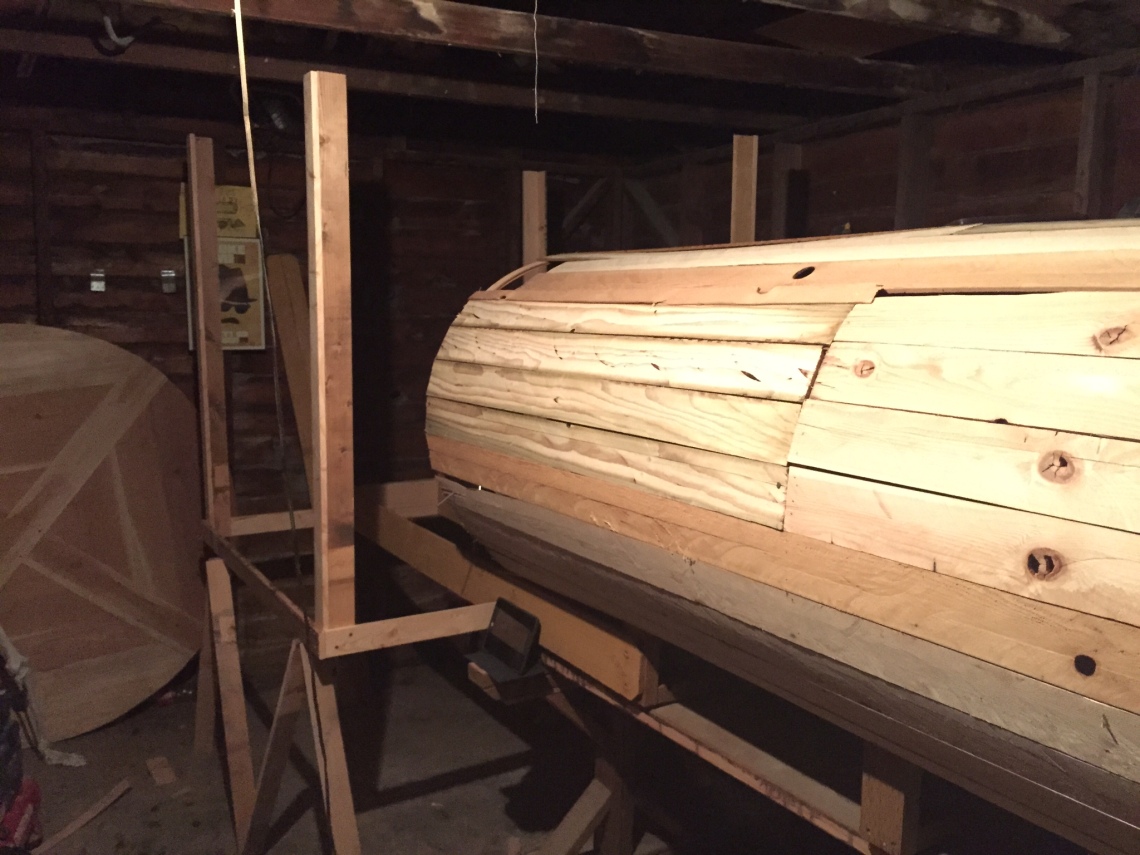 I’m starting to get the overall feel of the train now.  I boxed in the cabin more, taking into account the door and windows all around. 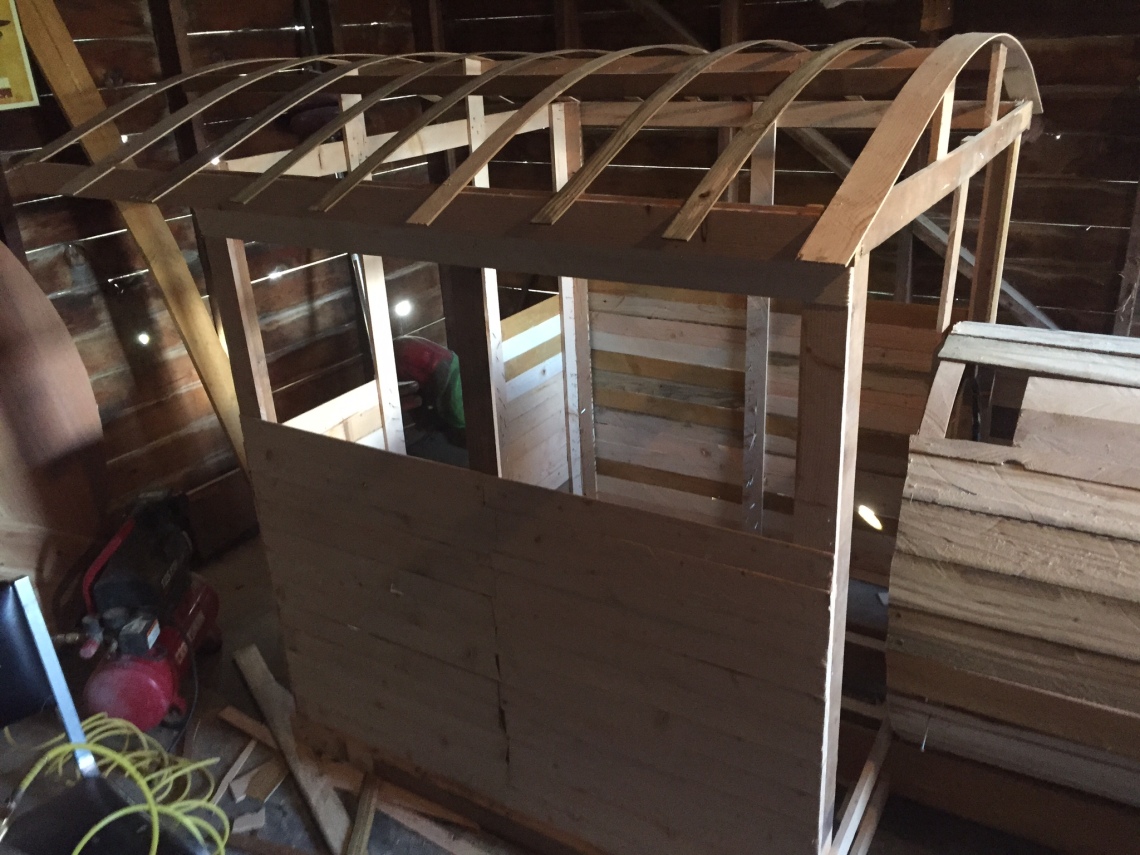 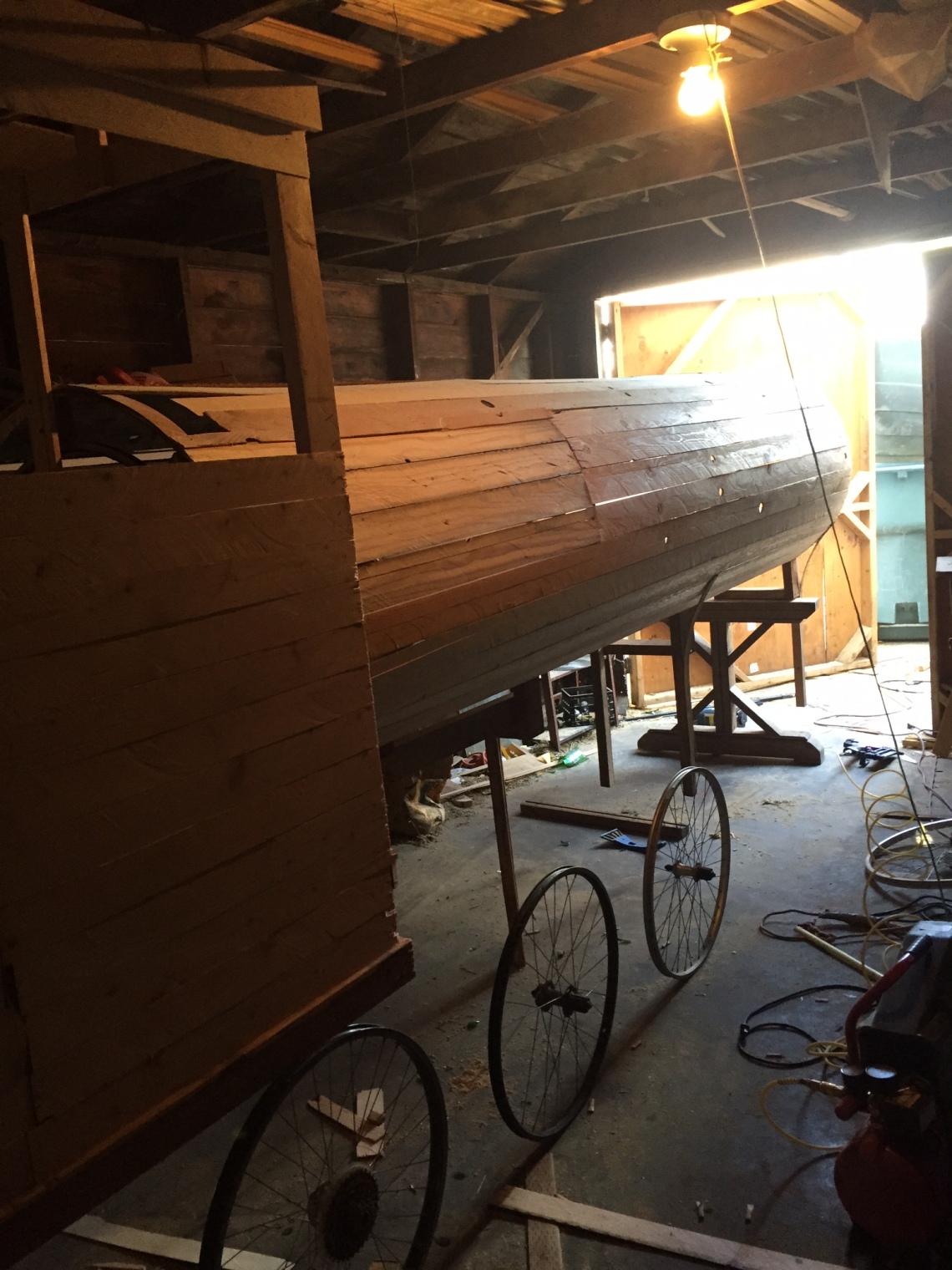 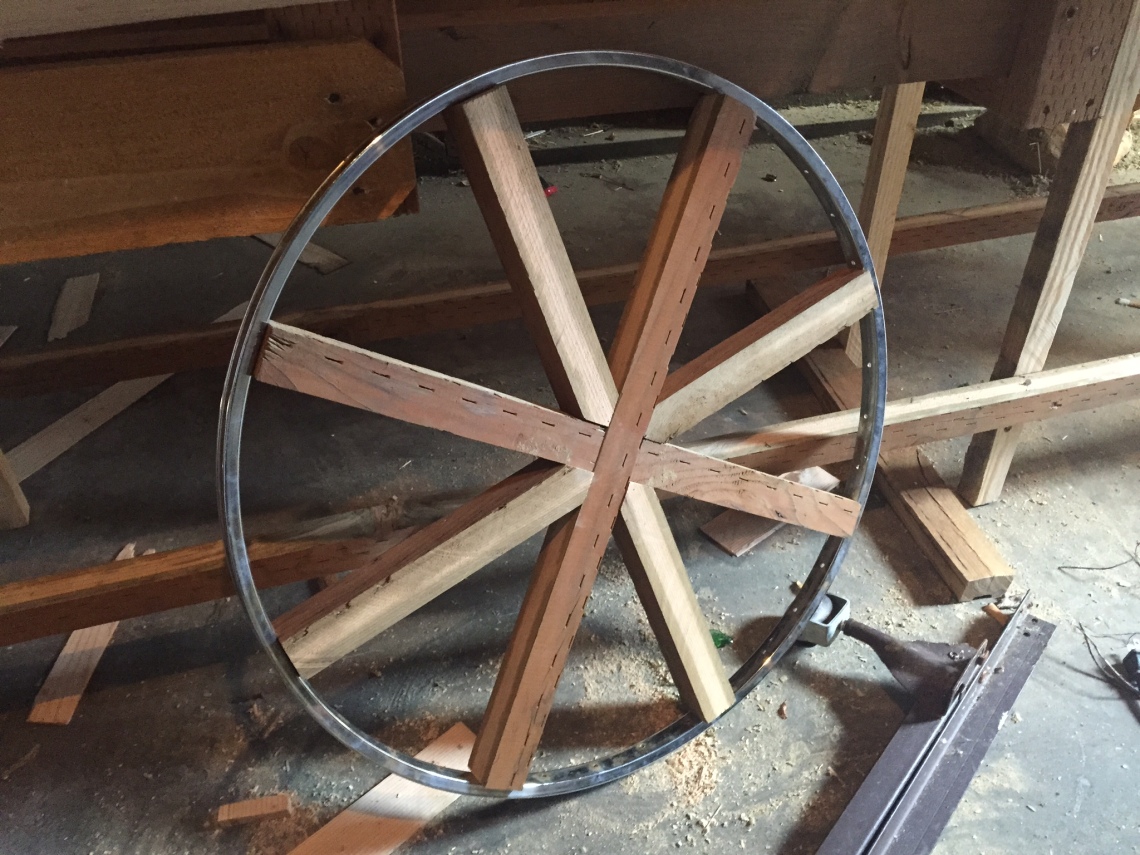 …and put them under the boiler tank. Also pictured here is a long piece attached horizontally to the vertical pieces. I had to eyeball (like everything else!) the height this would put on the train engine. Scale is so important at this stage when you are building something creatively.

I have started to build out a few things in this photo. really just trying to sturdy it up and make it more mobile so we can carry it to the front yard. 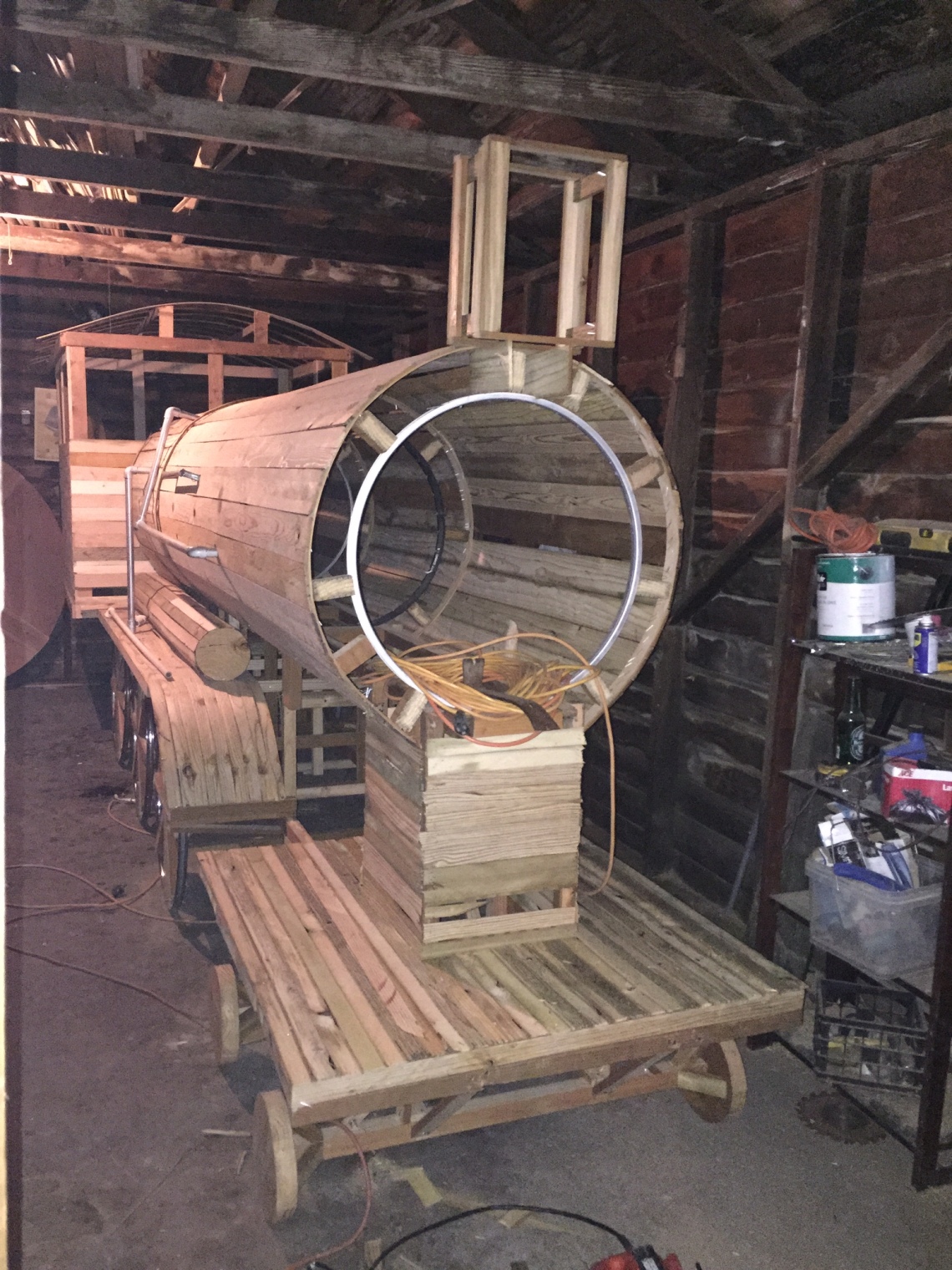 I added a lot of decking and a horizontal cylinder in front of the cabin after milling wood for a long while. I also started playing around with pipes and a headlamp.

Here are the piston cylinders.  I cut out a circle of wood and nailed strips around it. The nose of the boiler is also coming along.  I have wrapped a couple of circles into it in hopes that it will be enough for a finish nail to catch when I cover it.

Here is a better shot of what I am playing with to fill in the nose of the boiler. 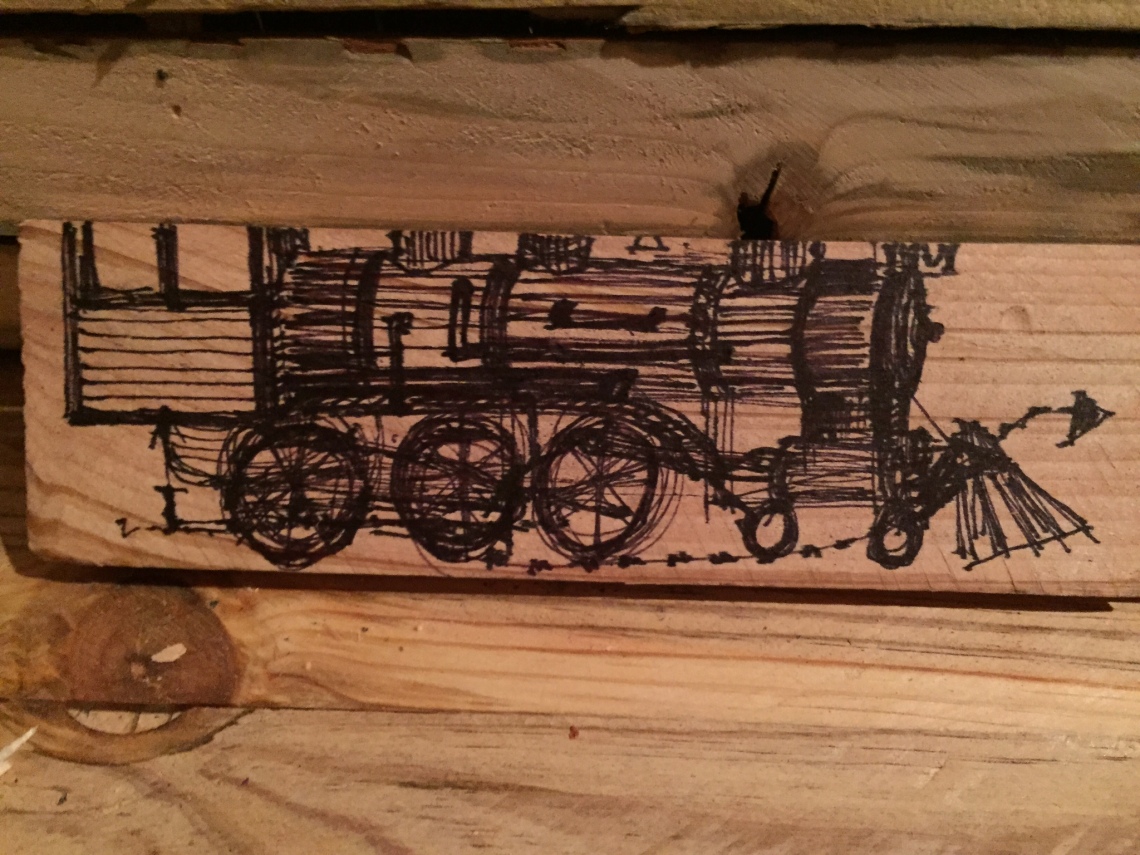 Here is another post-Google-image-but-pre-building doodle that I just found on a piece of scrap wood. It’s pretty close so far!

I have added lots of black paint to everything and the front grille, and am still trying to figure out the front of the boiler tank. I also put a tiny kid bike wheel rim in the headlamp.

I am just adding the drive arms to the back of the piston here. If this thing were actually mobile, there is no way that these would be functional, but I don’t think anyone will notice… 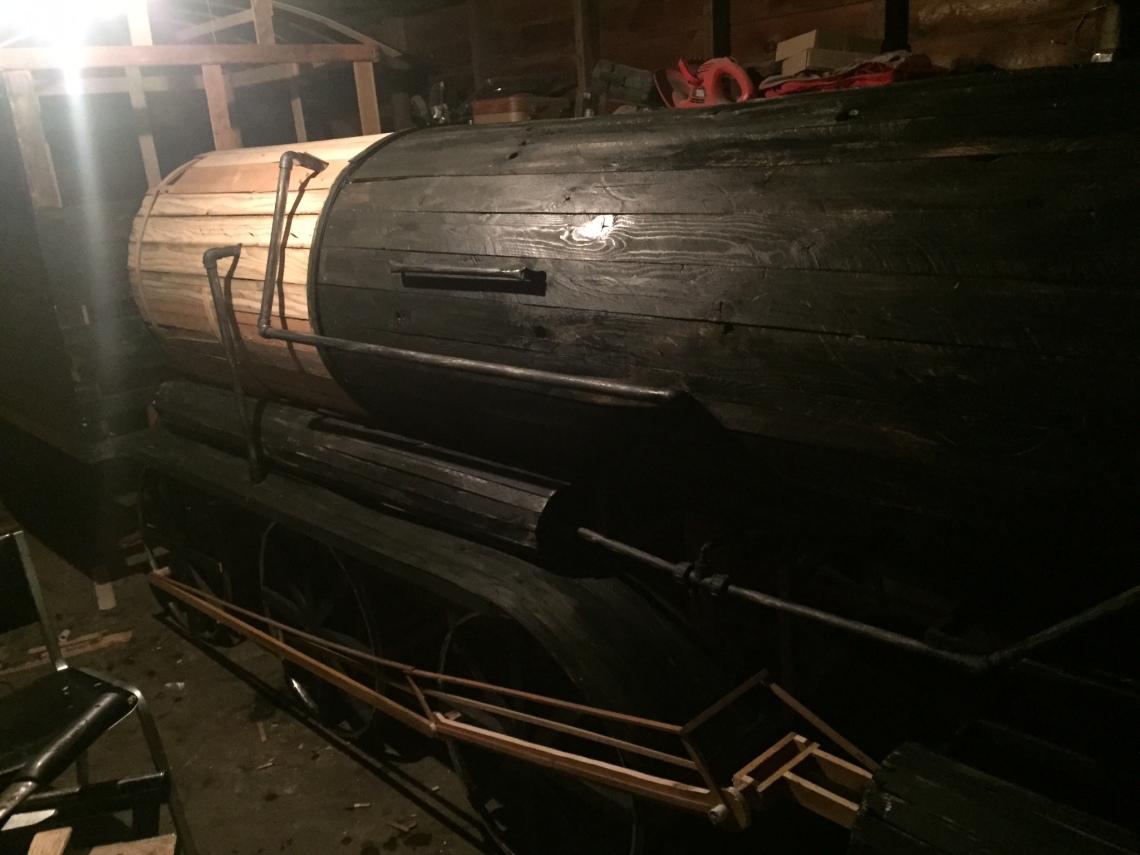 Here’s another shot of where I am now.

And more of the same. 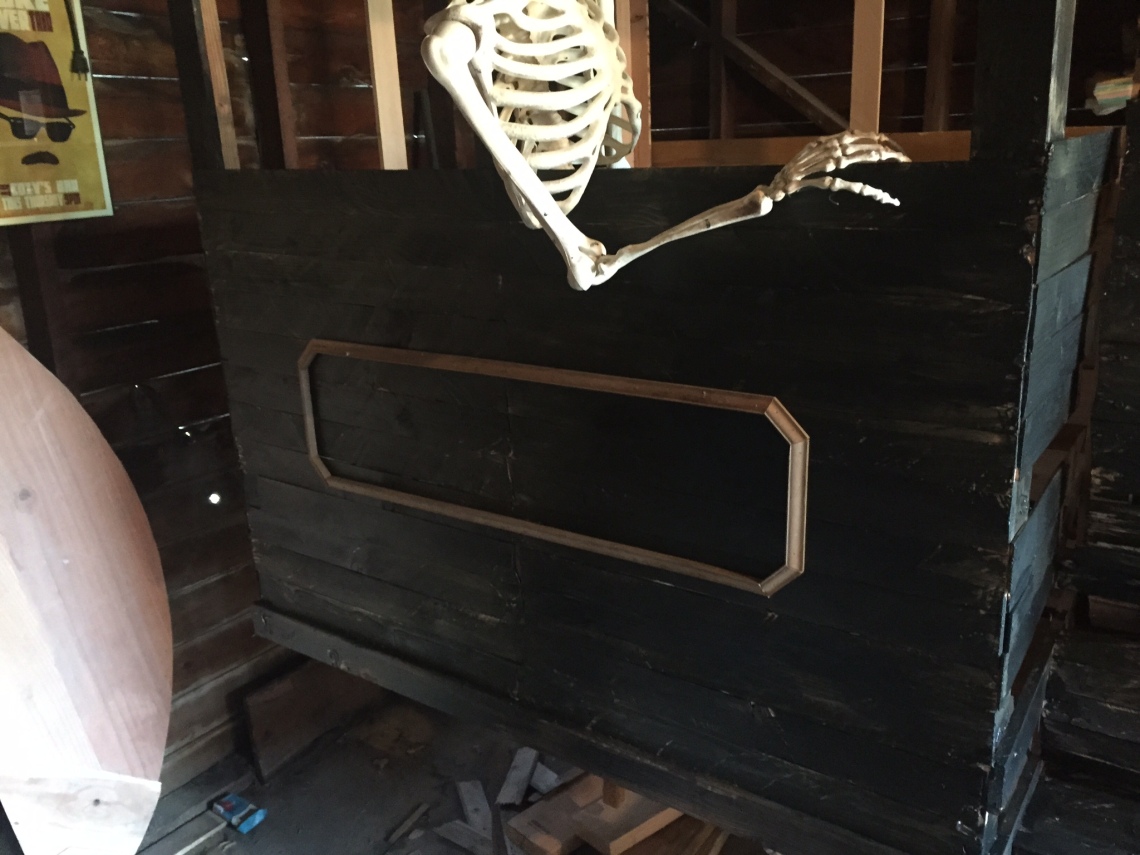 We’re going to need a name for the railway, so this scrap molding will be a nice spot for that.  Instead of making a square, I used the 22.5 degree angle on my miter saw to add the little cut-corner look.  I got the idea after Googling a bunch of old Western railroads.

I milled a bunch more thin pieces of wood and decided to just fan them out from the center of the circle to make the front of the boiler.  I have also now spray painted the grille and the front silver.  The circle in the middle is the other child’s tire rim from the same bike, but i don’t think I like it just yet. 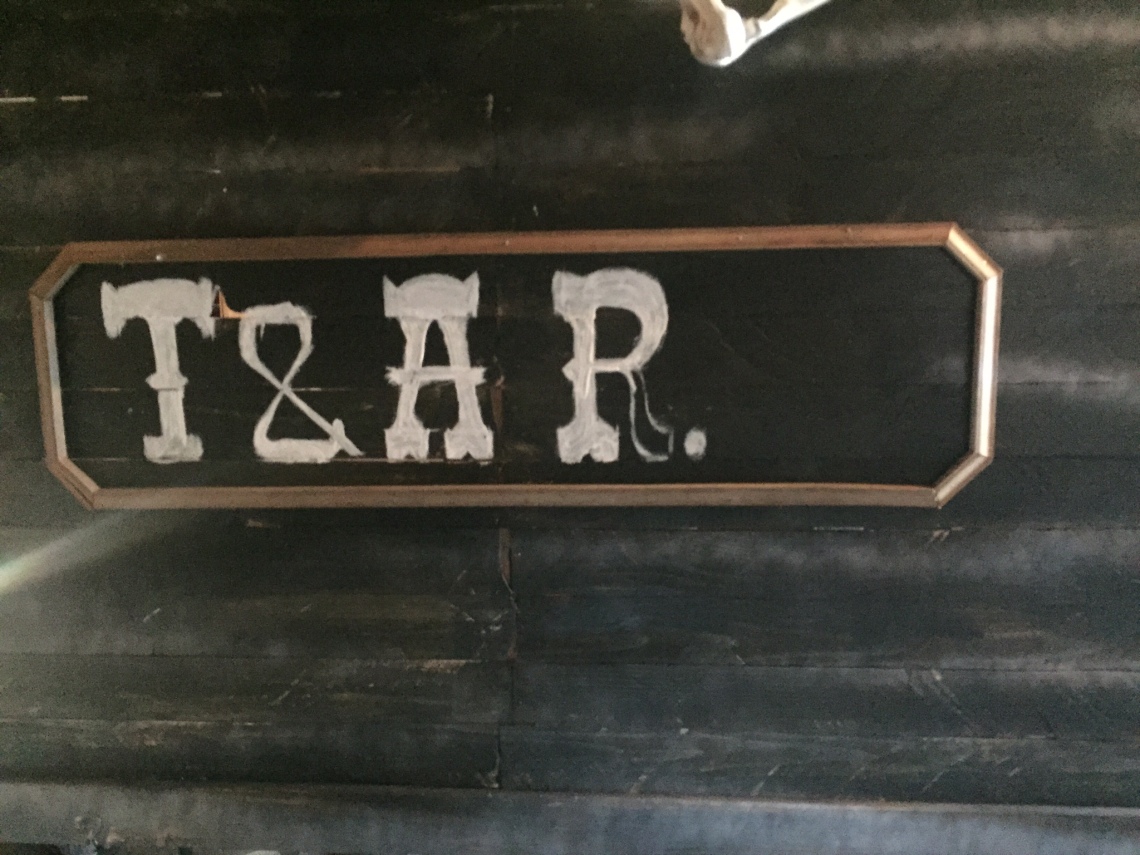 The lettering is coming along a lot better than I had hoped! We decided to name our railway “T & A R. R.” which stands for “Tera and Ammon Rail Road.” This can also be construed as meaning something else, which we were alright with :’)

I added some grey fabric to wrap the nose of the boiler into the piston cylinders.  This was just some 10-year yard fabric that I had left over from lining the beds in my front yard, but it had a cool metallic look to it after I brushed some grey and silver paints over it, making it look more like the iron sheet that it would be on an actual train.

This is the first shot of it as a mostly complete train!  I am getting a lot more excited about putting it out now that I’m seeing it come together.  There have been a lot of times during this particular build that I have thought about quitting or trying something else entirely.  Seeing it come together really is rewarding this year because this has been a very difficult job so far!

I moved it out into the driveway today with the help of a small furniture dolly, and I’m beginning to add the thin slats to the roof and the back of the conductor’s cabin.

Here is the beginning of the cattle car.  I just made the length of it approximately the same as the engine, as well as the width.  I made it just shorter than the conductor’s cabin roof so it will line up with the engine when I add the slanted roof and the wheels to the bottom.

Tonight I boxed it in a little more, but I had a lot of “work” work to do, so this is where I’m stopping for the night.

Now I’ve got the cattle car moved out behind the engine. I also started to put the horizontal slats in place.  These, again, are very thinly milled scrap and pallet wood. A table saw is so essential for this type of thing!

As per usual, I started to paint the cattle car before it is finished because I can’t wait to see what it will look like.  I picked some random lettering for the sides so it looks like a numbered car from a yard.

This is the roof, and I am leaving it open as well as the sides so that I can put a fogger in it and let light shine through.

And I also got the roof painted in tonight.

Again with the help from some exceptional neighbors and my younger brother, we got it moved out tonight. I also began to paint in the “Diablo Grande” insignia on the front side of the cattle car.

Tonight I routed a dryer vent up from the boiler tank (where the fog machine is) to the smoke stack (where it is coming out). This is starting to look really cool!

Now I’ve got some more lights added and the wheel base for the cattle car.

I’m just playing around with how the cowboys will be placed. 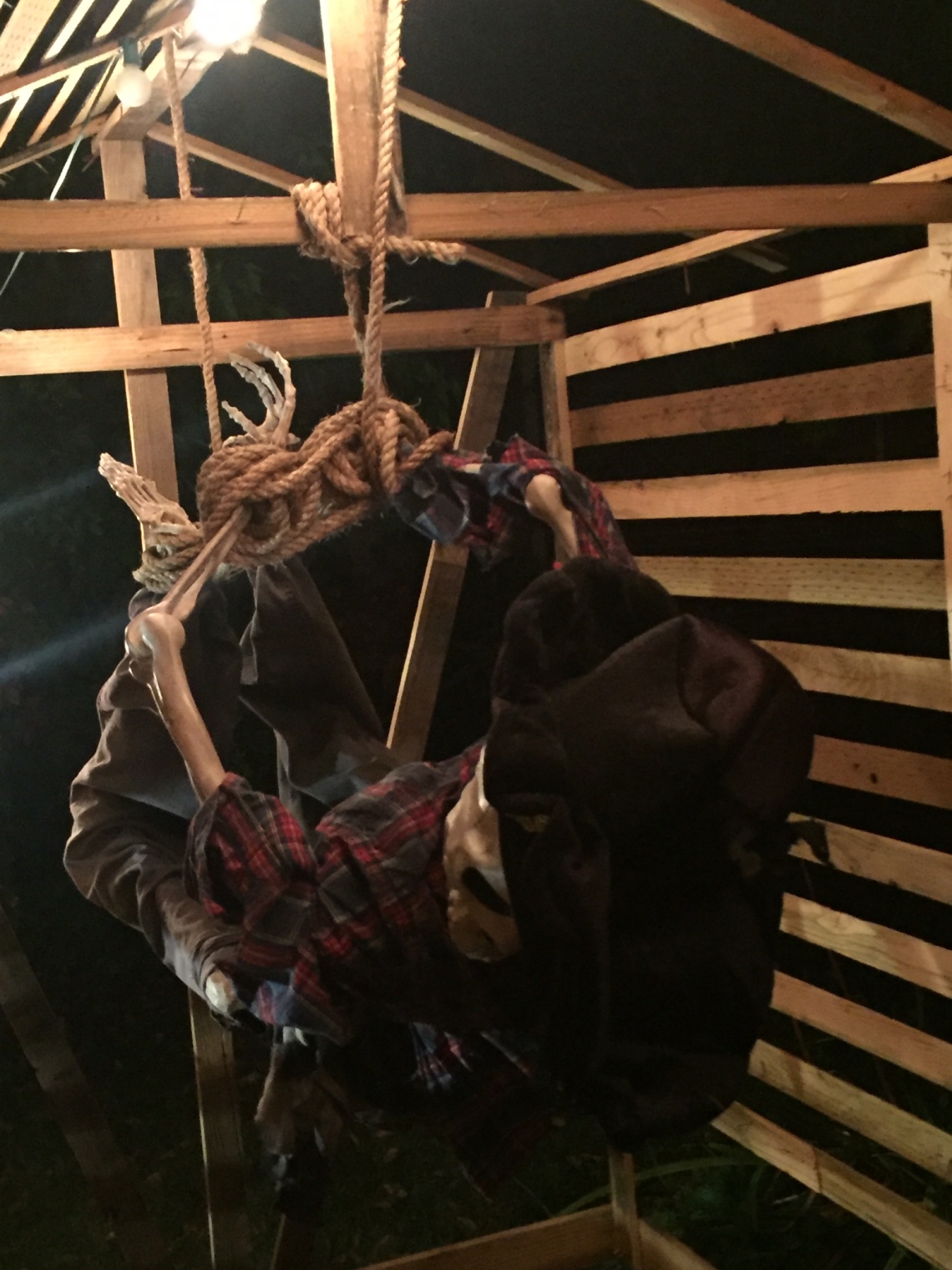 I’ve decided that the cowboys should be strung up and dangling in the cattle car.  We used the ropes from the pirate ship we had left over and they work great!

This guy looks pretty cool hanging out of the door with the fog in the background.

…and I also added some stakes and ropes to keep as many kids off the grass as possible.

This picture was taken by Ravell Call of the Deseret News for an article they did on our Skeleton Train!  It was a lot of fun to see our Halloween yard in the newspaper and on the news again this year! 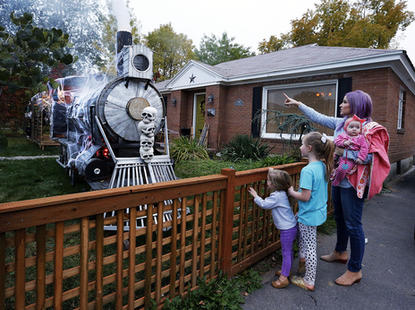 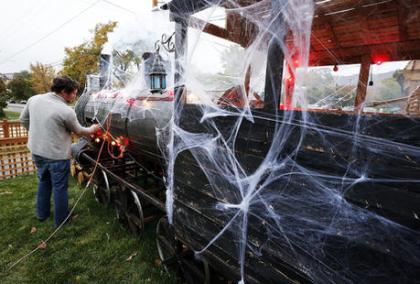 These are more photos (by Ravell Call) for the article.

Because I spend almost the whole Halloween evening yar-harring, and he-hawing with everyone, this was the only picture I got of the massive crowds.  This is probably traffic at the lowest point of the night for us. We BLEW through some serious amounts of candy! 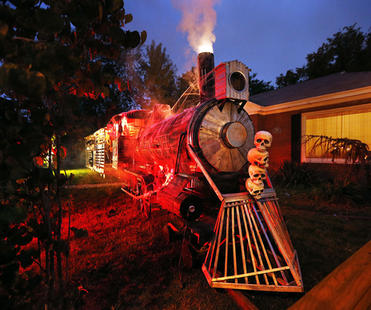 This is how the final product looked (again by Ravell Call), and we couldn’t have been happier this year! The cylinder on the nose of the boiler tank ended up being a springform pan that I got from the dollar store (for $1).

Lots of Cypress Hill (these guys are not good, they are actually quite bad; I still don’t know why I listened to them the whole time), many beers, a cute daughter and a wonderful wife.

About $30-$40 after buying finish nails, beer, and cigarettes.

A sweet little old lady came and asked me if she could borrow the train for her church’s Christmas party and turn it into a Polar Express train.  Because we destroy and throw away each year’s Halloween props, I told her she could only have it and that she couldn’t bring it back. I think that all they did to it was cover the 666 on the boiler nose with a wreath and blacked out our T&A R.R. on the side of the conductor’s cabin. Either way, they can’t exorcise the evil spirit that was built into it from the ground up.