Halloween is the best holiday in my opinion. It’s fun, interesting, and there are no gifting or family obligations to keep up with. It’s pretty much as big or small a party as you want it to be, unlike other major holidays.  We just LOVE Halloween!

Last year we spent about 30-40 hours throwing together our first attempt at a big Halloween yard  (See our Hellbrier Cemetery post from 2013). We loved the response we got, and decided to give it another big effort and see what happens.

(I suggest playing the audio file below while looking through this post.  It was our background music and features my father, sister, and aunt as well as myself…and it’s fairly bad, as are Tera’s birthday spoof songs.)

Sometime in September, Tera and her sister went to Costco and she came home with three full plastic Halloween skeletons. I unboxed the three gents, and looked at them propped up on the back yard picnic table. They needed a good home on a pirate ship. I need the ship part of that previous sentence, and I need a big one.  One that will at least be to-scale (or thereabouts) for the skeletons. 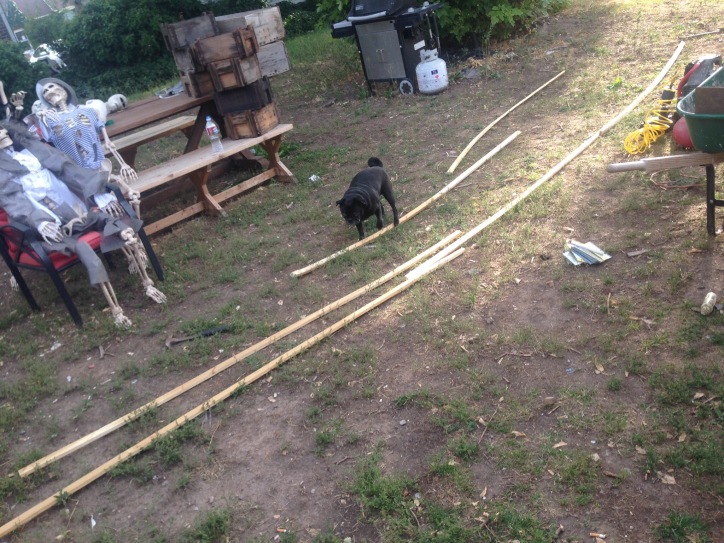 And so it begins. I just went down to Lowe’s and checked out their cull lumber rack outside of the contractor’s entrance. There was a big, big bundle of wonky furring strips for $40 bucks.  I had to take it.  That’s what made last year possible too. These six sticks pictured above were selected for their appropriate degree of wonk, according to what I think will be a good shape for the handrail line of the ship’s basic shape. Our dog Neko had some say in the selection process as well. There he is inspecting. 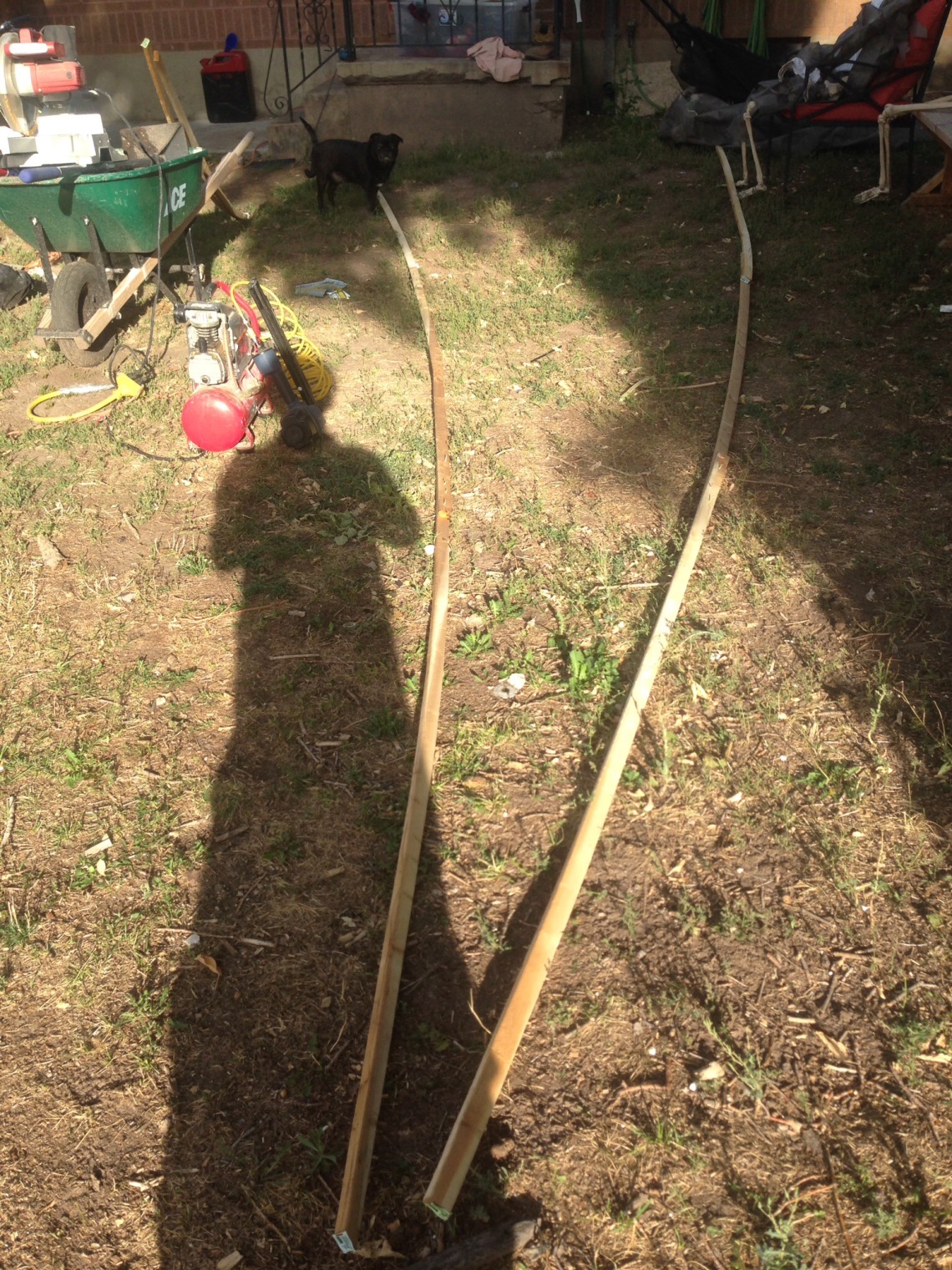 After tacking the strips together with a nail gun, here are the opposite sides I’ve decided to start with.  I’ve never built a boat before, and am not familiar with any nautical terms, so please just follow the unstructured thought process on this build. I spent a lot of time on the internet looking at pictures of different pirate schooners and decided to start here.

I hammered in four temporary posts and lifted this bit up onto them. This is so that I can work on it without bending over so much. Also, notice the side-to-side sticks of wood that I put in.  These are what creates the curve of the boat shape and keeps all in place. I will probably cut those out at some point, but I’ll have to see how it turns out.

This is about where I see the captain’s cabin/upper deck being.  I just cut the wood strips about where I thought they should be and tacked them in place with my finish nail gun. I’m thinking windows should be here somewhere too, so I tried to visualize that within the spacing and size.

So all I did here was just cut out about thirty pieces of about 10-12 inch strips, nailed them into the existing sticks, and added a horizontal piece to create the beginning of the handrail top.

Before I get too far, I need to have it in the driveway so I can move it out front when it’s however-much-heavier.  I had to lift it up over the fence by myself, which was a bit of a task not because it was heavy; just awkwardly shaped.  Once I got it out here, I added the little rectangle to the front nose of the ship.  This is where I’m thinking all of the outer planks will eventually land.

I now put in the beginning of the bottom curve and added one vertical stick to hold it in place. 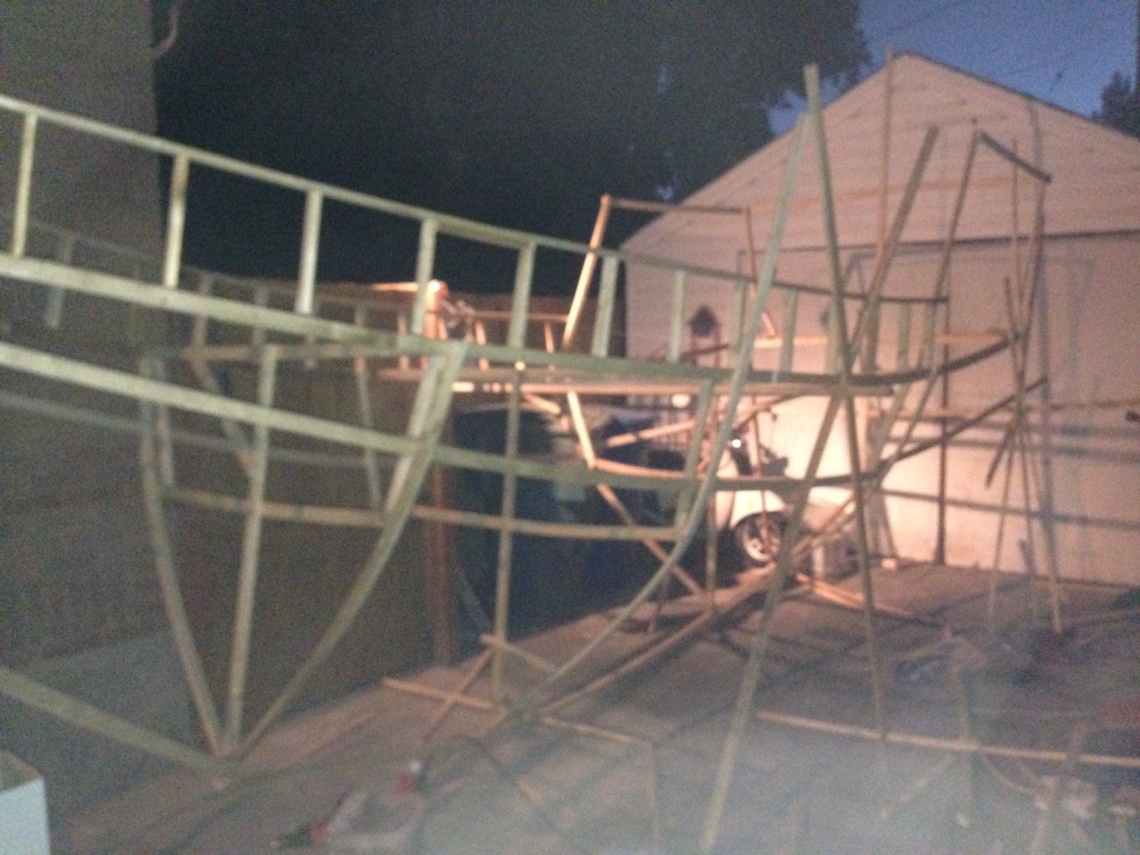 After a couple more hours of building, this is where I am with it. The new additions are:

Also keep in mind that some of what you are seeing are temporary stilts to keep it up in the air. These will be removed, of course. 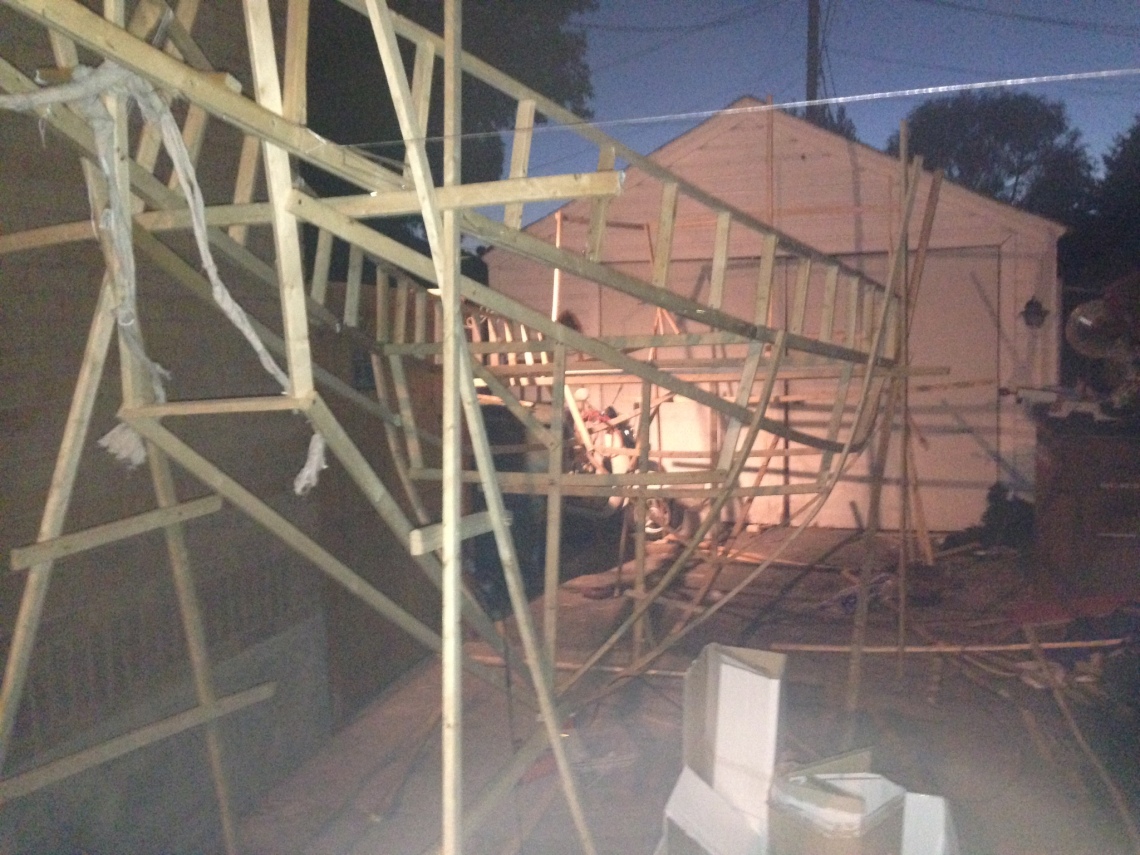 Here’s another shot of where I am from another angle.

And another shot from the front. 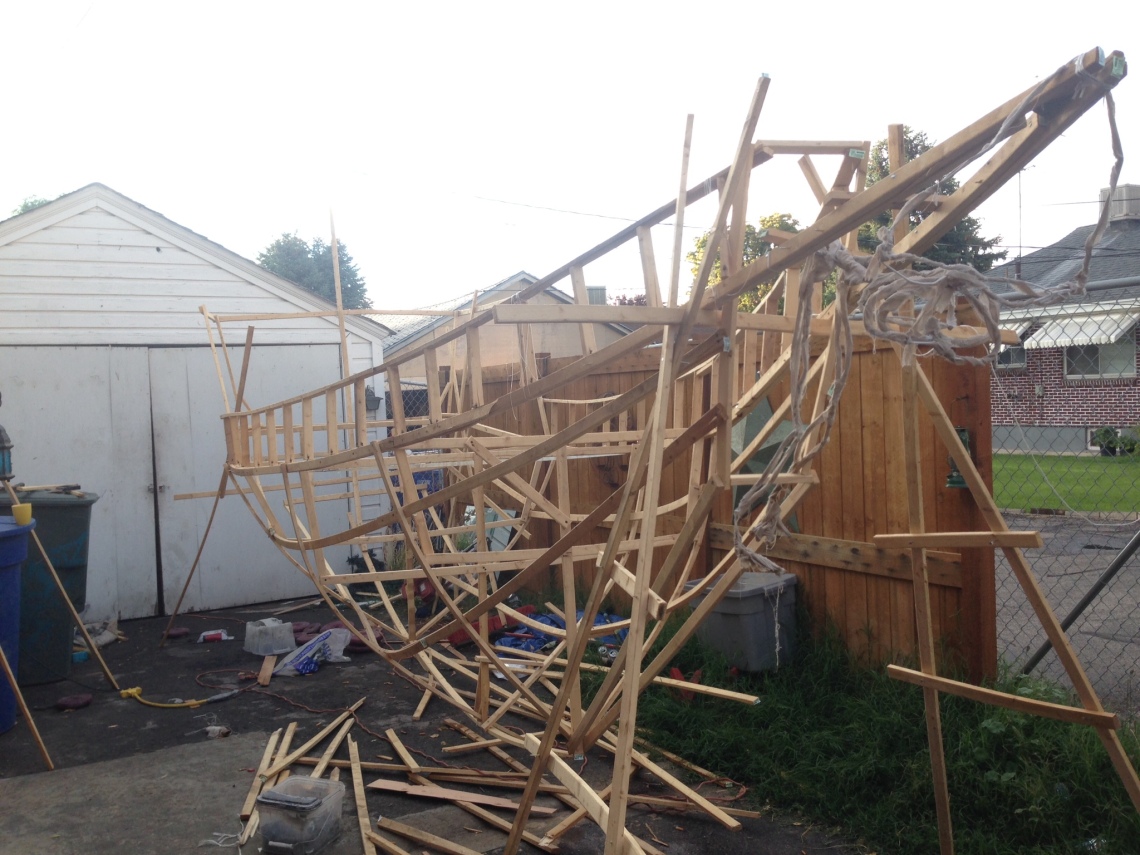 I had a lot going on today, so I left and came back to the project.  Tonight I began working on getting the outside covered in wood. I “ripped” a bunch of boards on my tablesaw (meaning I cut it in strips lengthwise), making sure it was very thin; about 1/8″. This is so I can make the most out of the free scrap wood I have, bend it easily, and also so that the thing won’t weigh a metric ton when I’m finished with it.

This is where I’m ending tonight.  I have a bunch of wood milled (as you can see on the ground), and I’ve just been tacking it to the outer side ribbing of the ship with a finish nail gun.  This, again, is using the same method I was before; trying to place the wood slats in the middle of whatever area I’m in between vertically. This gives it the curved shape that doesn’t look too wonky, as is also a reason why the beginning stages of building anything are so important. Anyway, I just kept going until it got fairly well filled in. 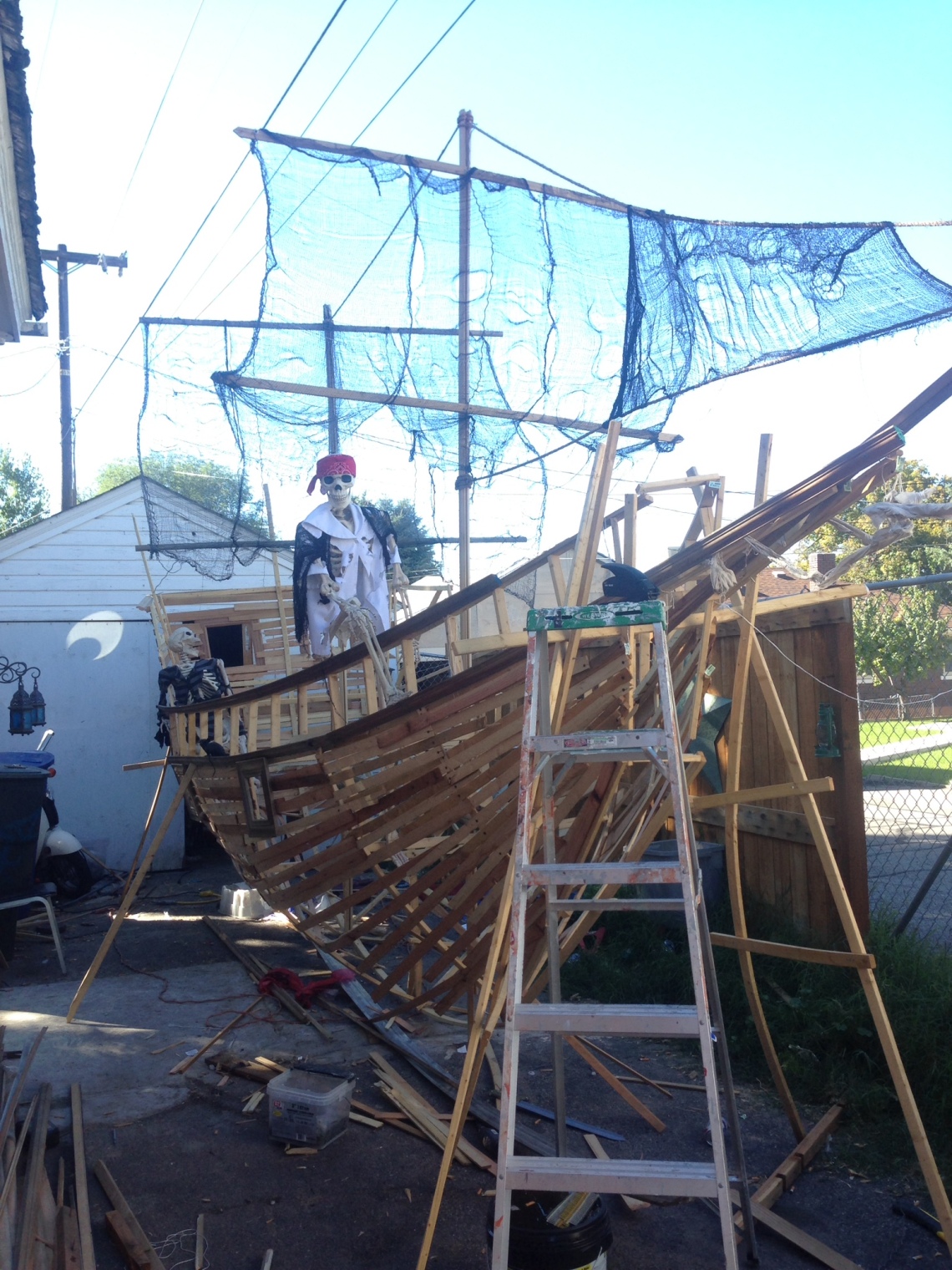 Now we’re “getting there” visually.  I added the two masts today with two horizontal pieces of wood each, I used bailing wire to form the basic shape that the sails would be in with wind in them, and covered them with “creepy cloth” (which is just that very stringy fabric that is sold for about $1 apiece at the dollar store around Halloween).  I used 8 of them to cover my two sails and the front bit. Before I placed the creepy cloths on, I wrapped some rope around the masts and tied them around a few things as pictured.  I tested (and failed) my Boy Scout knot tying merit badge from eons ago, but if you squint your eyes it looks authentic….ish.

What would I do on Halloween without my neighbors? Many thanks to Johnny, Katherine, and a stranger passing by for helping me get the beast out on the front lawn! I added some ladder-type roping to it coming from the middle of the mast down to the handrail. The wood “A” on the side is just one of the temporary stilts I tacked together to hold it up in the driveway.  If I were to move it, I think the whole thing would come tipping forward.

If there weren’t a pirate hanging from the gallows in penance for his plundering, it just wouldn’t be the real deal. This guy will have the “Scallawags Ye Be Warned” sign hanging around his neck, but I have to stop for the night and get back to “work” work. 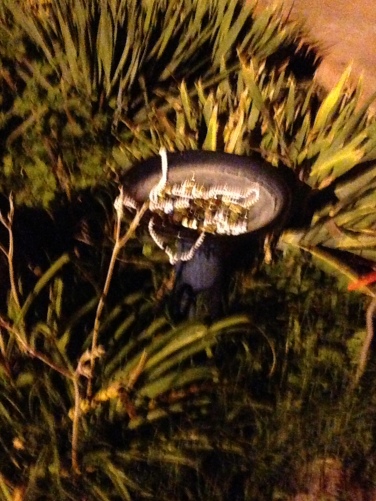 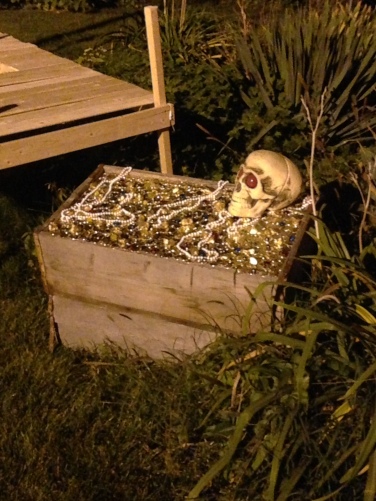 Gotta have some booty and some swag as well.  Many thanks to the wife, Miss Tera, for adding the treasure chest, the birdbath o’ booty, and the skull totems!

I am trying to light it up by putting clear and white Christmas lights throughout the ship.  I still need to fill in some parts with wood (like the upper deck wall, etc), but I am going to leave the square hole in the center of the back of the ship so I can get in there easily and refill fog machines and so on.

I haphazardly slapped some wood stain on the gallows today to make the wood look aged.  I also hit the boat with stain. Remember, if you are trying to make wood look old, just go for it and don’t waste any time trying to be exact about it! 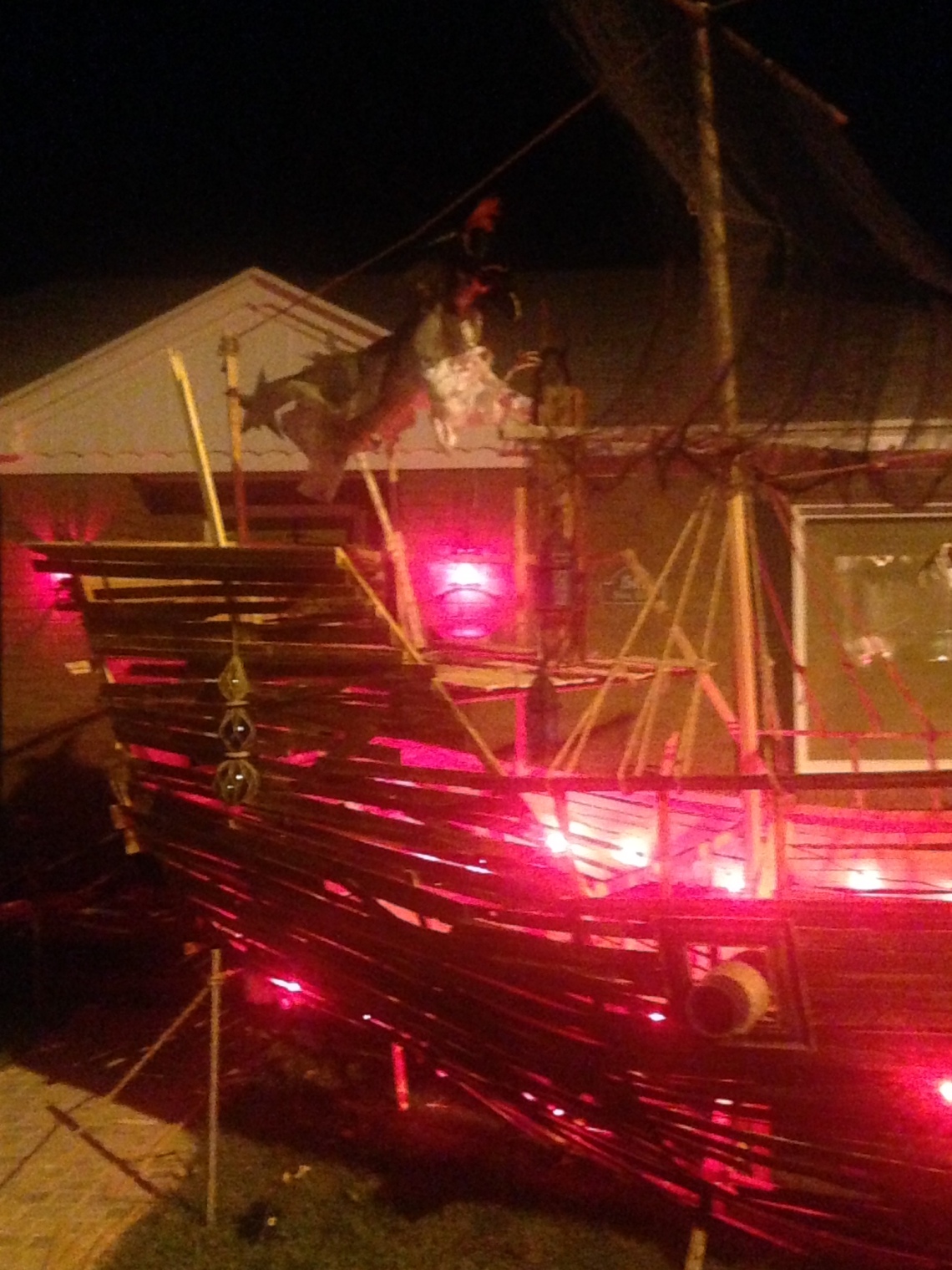 This is Cap’n Leopold McYarrHarr at the helm of his ship, navigating straight to Hell; he will not pass Go, nor will he collect $200. Notice the cannons coming through the square slots.  This is just 4″ ABS tubing (extra from re-plumbing my house) with some rope wrapped around it and there is a fog machine placed behind each of them for effect.

This is how it’s looking so far.  I really need to get the prop out from under it.  The way that I ended up doing that is by getting inside the ship, hammering down 4-6′ stakes into the ground, and using a framing nail gun to attach it to a sturdy part of the boat.  It has 6 of these, and they are holding it in place now very proficiently. 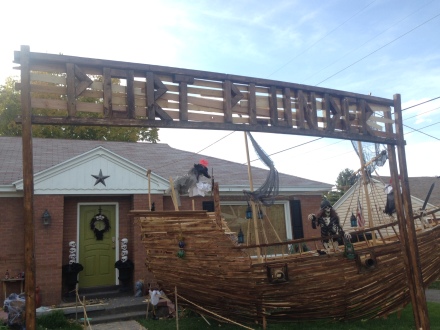 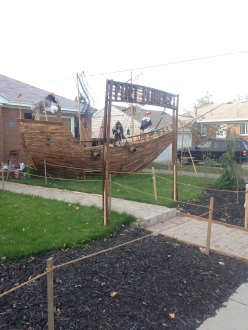 I felt like the whole place needed a name, so Port Plunder was what we decided on.  In the true pirate context, I was going to go with something a little more abrasive like “Port O’ Wench” or “Booty Bay,” but then I remembered that 95% of this whole thing is meant for kids.  Port Plunder does the trick nicely. 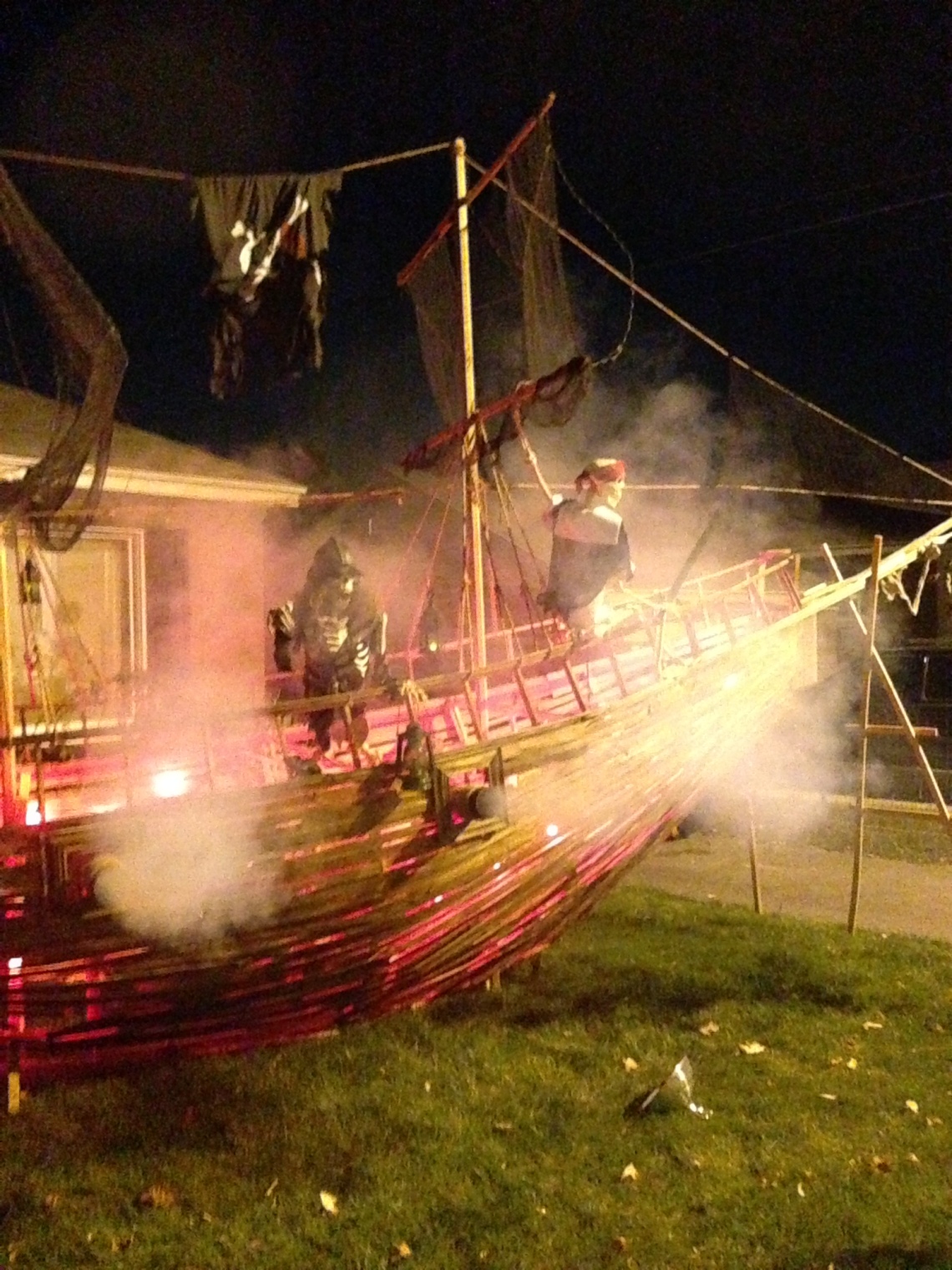 Here’s a photo of the cannons blasting their smoky shots at the masses. 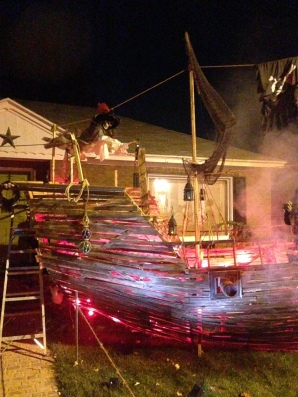 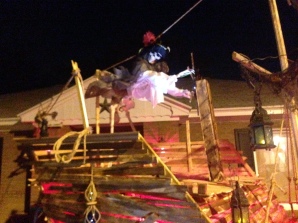 Really though, what is Halloween without fog and strobe lights? 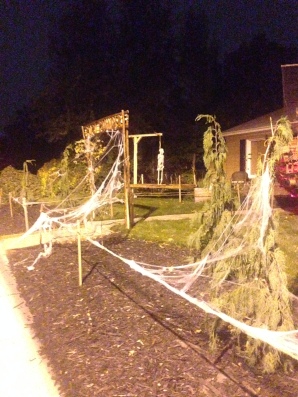 I stretched a bunch of spider webs tonight, and it’s lookin’ tasty!

Threw a rope up to the roof with a grappling hook also tonight.  This scallawag is heading in to rape and pillage as it were. 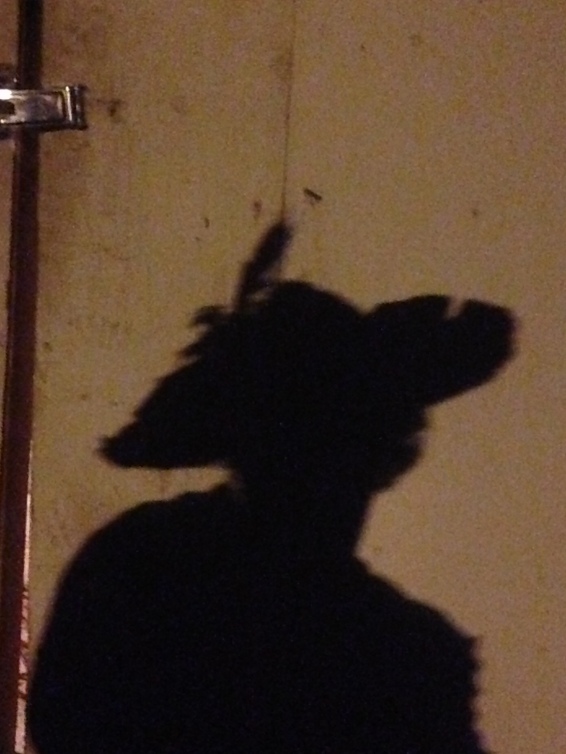 I also made my hat tonight, which honestly was copied a bit from Captain Barbossa in Pirates of the Caribbean. Barbossa, by the way, was a far, far cooler character, and acted out by Geoffrey Rush far better than Johnny Depp’s Jack Sparrow.  It took both of them to make the movie what it is, but Rush smashes it in that film. 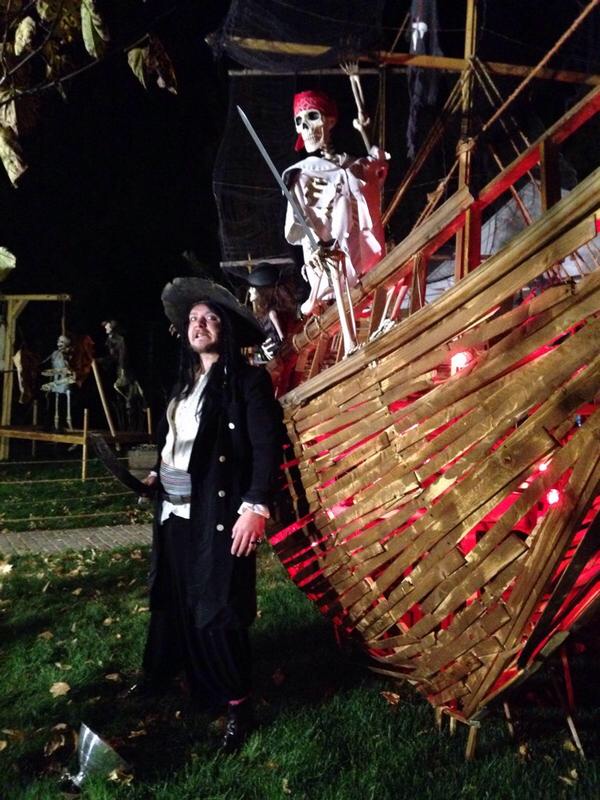 This is Captain Me standing by the ship.  My brother actually smelted steel and forged me a real, metal, butt-kicking sword which I am holding.  Everything besides the sword and the hat I made came from the D.I. (similar to Goodwill or Salvation Army in other states). 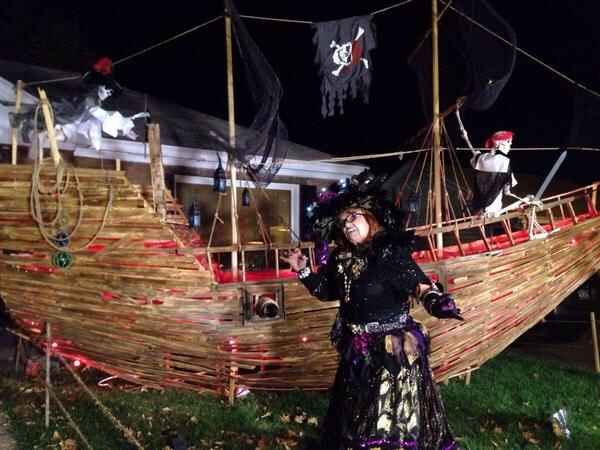 This woman is known in Utah as Lucinda, the Gardener Village Witch.  I did not know who she was until she came to my house to give me the award for best Halloween yard in Utah for 2014! Check out the news links at the top and bottom of the post to see her in action. 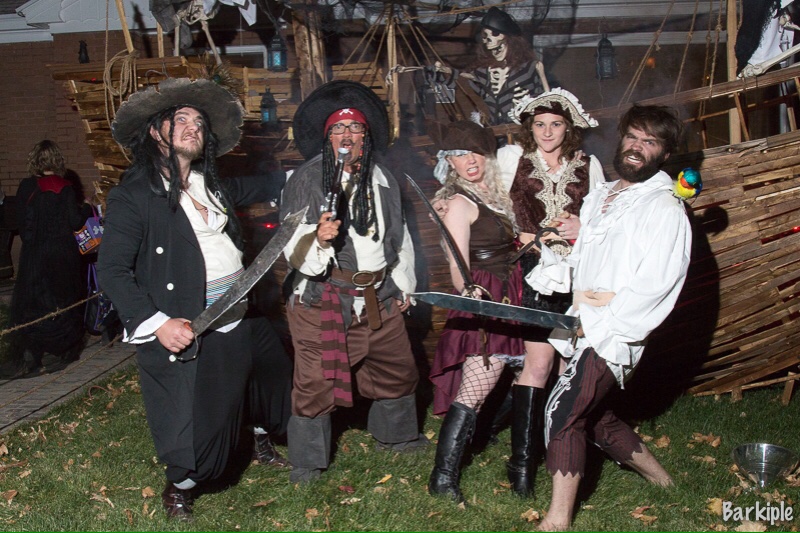 Photo by John Barkiple of SLUG magazine in Salt Lake City. From left to right, this is me, my awesome father, sister-in-law Shay, sister-in-law Lia and brother John. 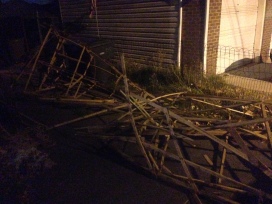 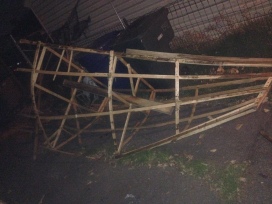 As with every year, here is the fate of the short-lived Halloween prop.  I do not want to store anything, and I sure don’t have the space for it.  It would just be hoarding anyway, which we are vehemently opposed to.  Thanks for reading, and…