IN LOVING MEMORY OF SHANE MIKESELL AND FATTY SQUISH McBUTTERPANTS

My good pal Shane has passed away. My memories of this specific event including Shane were a gift to my life, and I only wish that I had taken more photos of us, the igloo, and our good times had inside it. Happy trails in The Great Beyond, old friend. 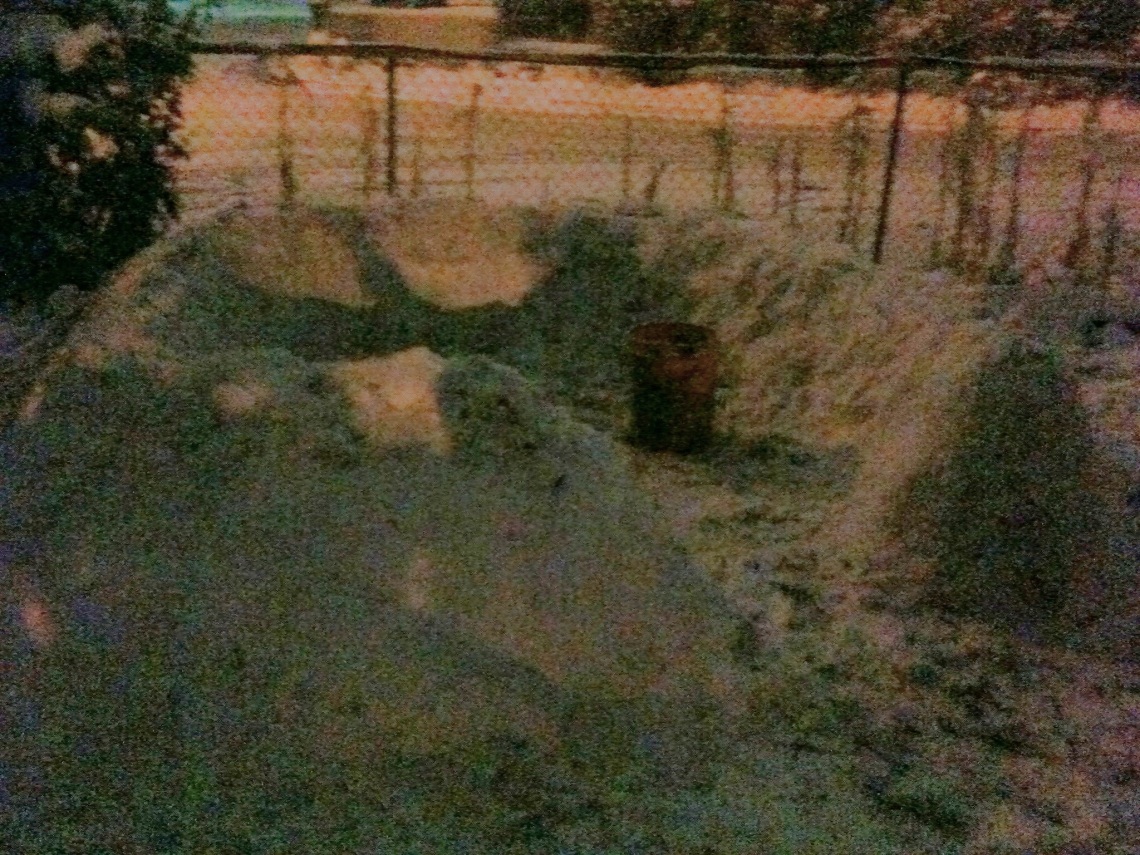 I started this by mounding up as much snow as I could to make a base.  I walked all over it to pack it down and the crescent shape you see here is pretty solid. 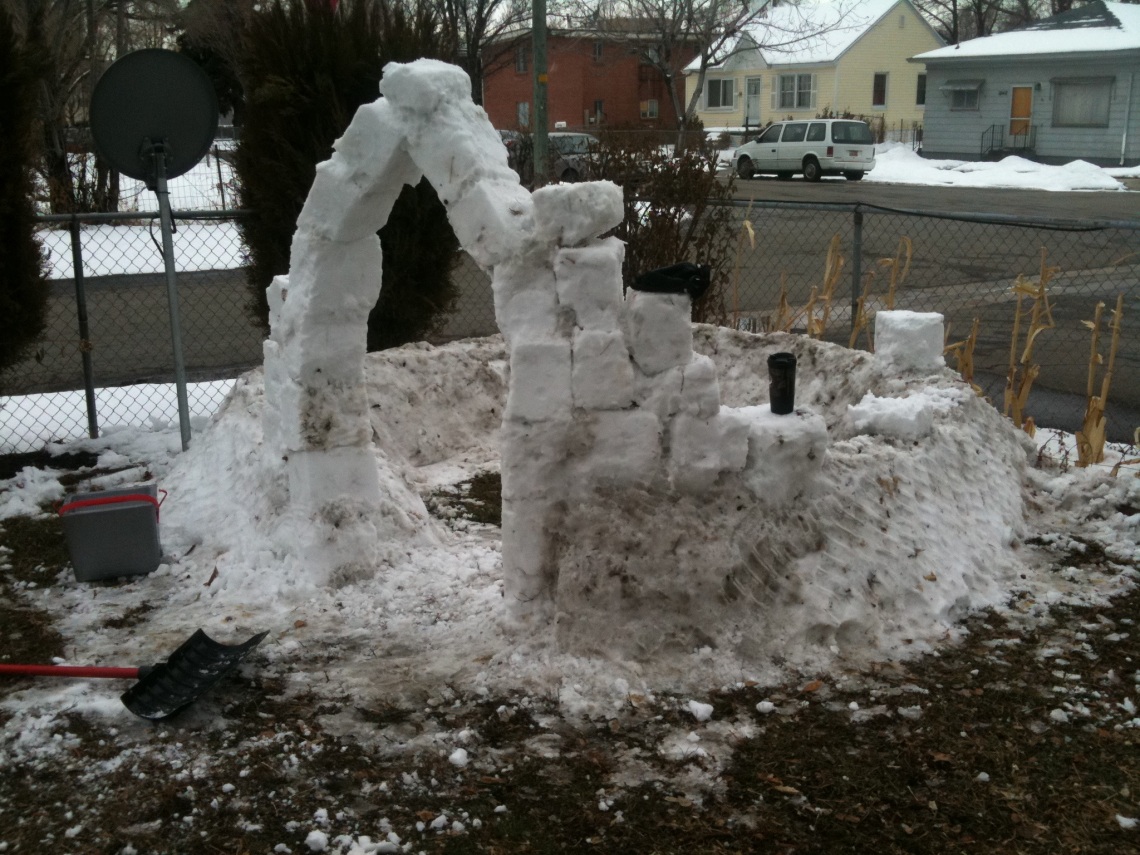 Thank God that it’s so cold out here so I’m not losing my work. I am running out of snow though.  I’m hoping it will snow heavy again soon. I started with the door because I’m usually impatient to see progress and wanted more motivation.  I really want to stand up in it and I’m not a pro iglooist, so this is going to be more of a bullet shape, instead of the standard semi-sphere. I think it will be sweet when I’m all done! 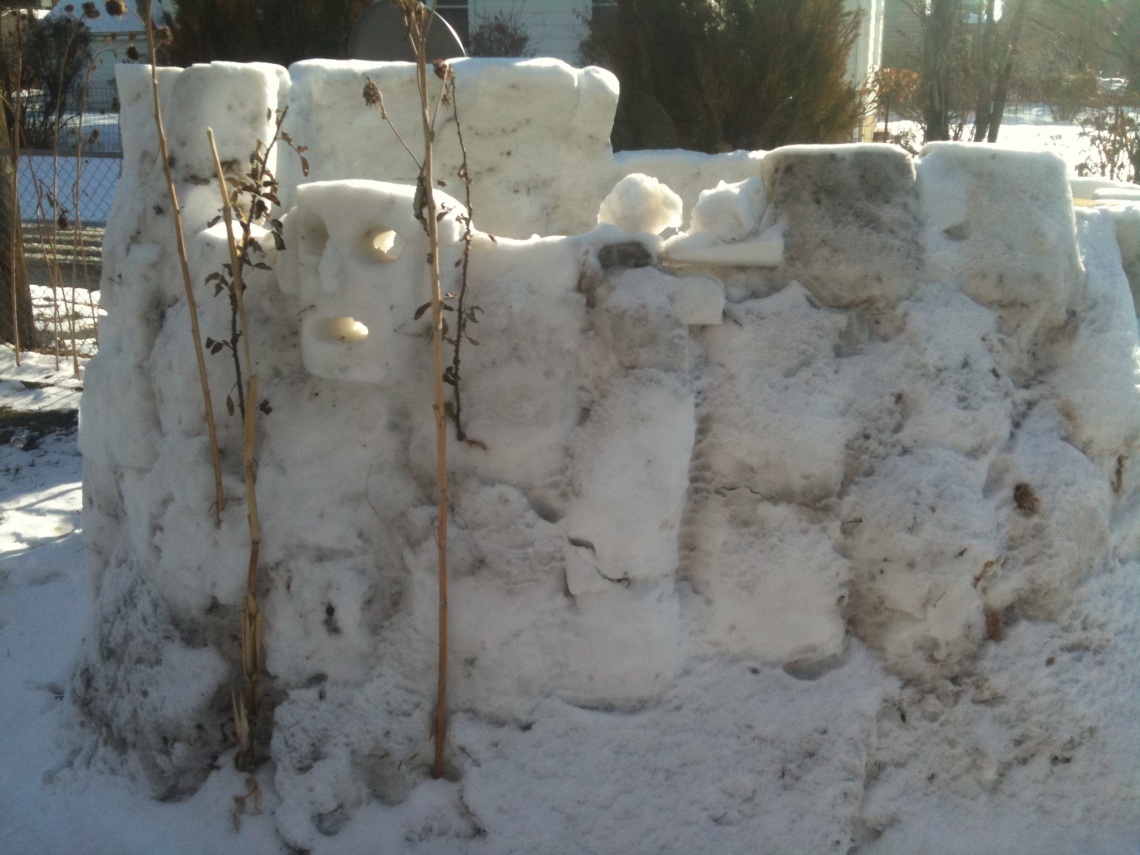 It snowed again, and quite significantly! I’ve already used up all the snow in the back yard  to build up the walls this high.  I also added an Easter Island-type head to the wall, and I’m lighting a candle behind it every night.  It lights up the face and looks really cool! It was also a signal to Shane that the igloo was open for business if he cared to come and join in.

My process so far is hard-packing the brick in a container, setting it where I want it, then making slush with added water and packing it between the bricks as best I can…so you know, your basic igloo.  I really want this thing to last for a while! A lot of neighbors are starting to show up and hang out in it with Shane and me. Booze, Miles Davis, and an igloo; who wouldn’t want to?

A lot of my snow bricks are different sizes either because one bucket fit better than another in certain places, or because some of them broke while I was packing snow in them. Because of that, I chopped off the top to be level so I can build the final dome easier.

After several drinks last night, Shane decided that this thing is starting to look like a cathedral instead of an “igloo” igloo, and I fully agreed so we carved a cross into the top brick above there door.

This is the first part of the dome coming up the front.

After several bricks falling down, here I am with the dome. I am adding more water to my slush mortar to pack in between the bricks and that seems to be the trick to the dome pieces. 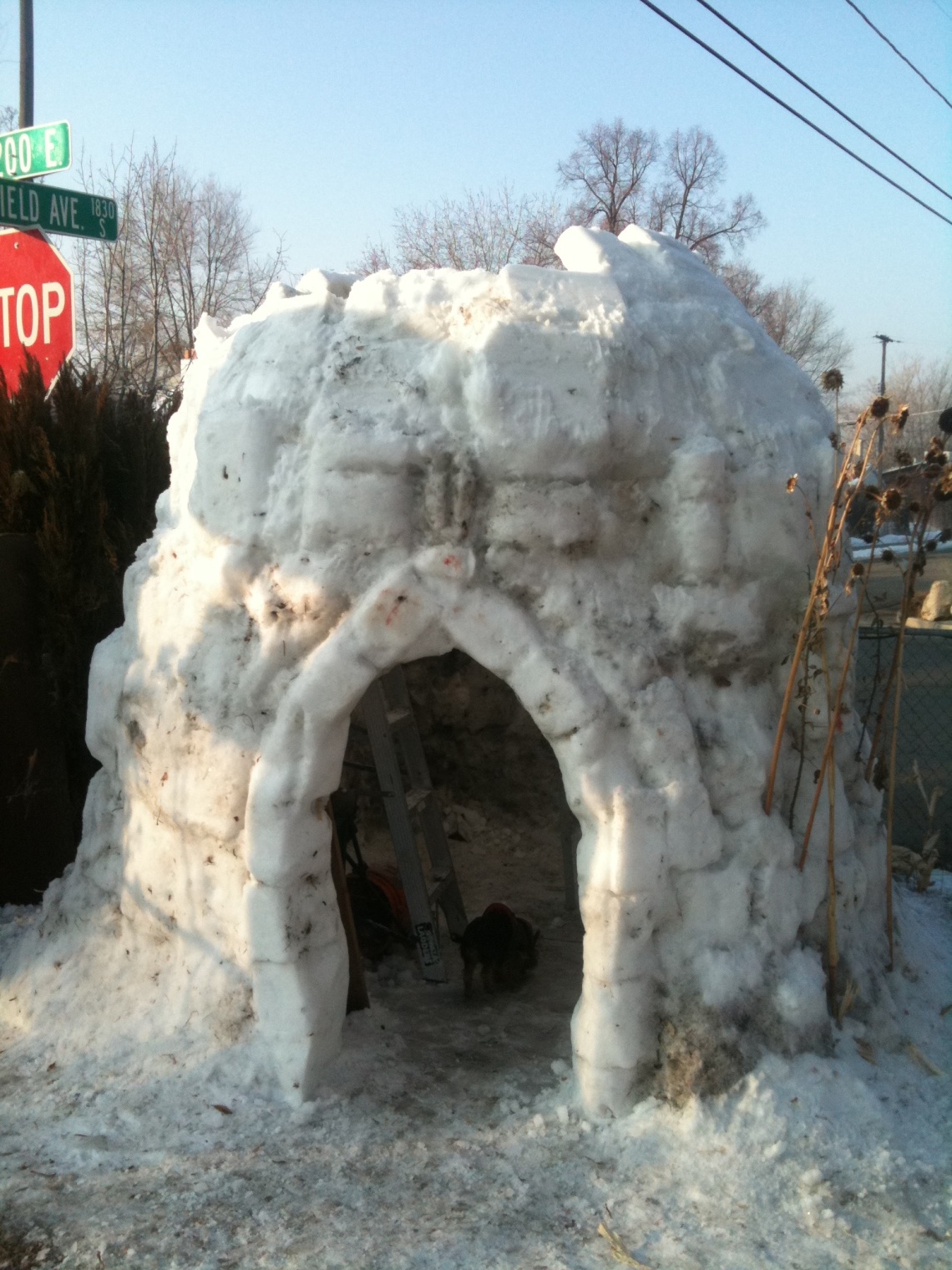 The dome is just missing the top bit now.  There isn’t anymore snow and none is forecasted.  At this point I’ve been forced to decide that I can’t continue (unless the weather changes quickly. We’ll have to see what happens in the coming days, but for now I am certainly enjoying the partying and random company I’m getting from the neighborhood! Who needs a whole roof anyway, right? We had six lawn chairs huddled in this thing last night with probably 6-8 more outside it, and we all had a great time.

Our very volatile Utah weather swings have brought us two warm days now in a row, and this poor party ship is starting to sink in a serious way.

Inside the door you can see that the dome shrunk down, lost its grip, and died. I think all told it’s been about three weeks that I’ve had this up now, and it has been more fun to build and hang in than I ever thought It’d be!  If you ever want to get to know your neighbors, build a big igloo where they can all see, hang out in it at night with good music and wine, and they’ll all come over to check it out. Your classic “if you build it, they will come” kind of deal.  It’s sad to see it deteriorate so quickly.

And now it goes the way of the world…to lower ground wherever that may be.

This was one of the most fun throw away efforts I’ve done in quite some time! There was something about building this igloo that was made fun just by knowing that it was going to melt and go away.  I will definitely be doing this again for many years!